Home » CHOC Neuroscience Institute » Dystonia: What It Is, Symptoms, Types and Treatment

Learning your child has a neurological movement disorder can be overwhelming. Our neuroscience team is expertly trained in children’s brain disorders. We will be with your family from diagnosis throughout your child’s growth to ensure the best possible outcome.

Dystonia is a neurological movement disorder that causes muscles to contract involuntarily. Dystonia is often caused by injury to a part of the brain called the basal ganglia that controls the speed and fluidity of movement. Abnormal functioning in the brain triggers motion, causing the muscles to uncontrollably twist or experience repetitive movements or irregular body positions, called dystonic movements. Dystonic movements are often patterned, can be painful and can range from mild to severe muscle contractions. Dystonia can affect different regions of the body, including the face, eyelids, jaw, neck, vocal cords, torso, hands, arms, feet or legs.

Dystonia is classified by both its cause and the symptoms that occur. The causes of dystonia can be:

Dystonia can occur alone or with other neurologic symptoms or movement disorders. It can arise at any point during someone’s lifetime and can either remain stable or progress over time. Dystonia is also classified based on the regions affected:

Dystonia can also be classified by the frequency and timing of muscle contractions. These classifications include:

What are the Symptoms of Dystonia?

Symptoms of dystonia vary based on the part of the body it affects and the type of dystonia. The main symptom is muscle overactivation leading to the contraction of muscles. Dystonia symptoms often go through stages. At first, the symptoms appear during voluntary movements or under physical or emotional stress. This can escalate to dystonic postures or involuntary dystonic movements while walking or even while relaxed.

Other signs of dystonia include:

Dystonia can occur at any age but can be described as early/childhood-onset versus adult-onset. Symptoms of dystonia in children may appear minor at first and in one location but may become more noticeable and spread over time to multiple parts of the body. When younger children are diagnosed with dystonia, there is a greater chance the symptoms will spread.

What are the Causes of Dystonia?

Underlying causes of certain types of dystonia may be treatable, so discovering the type of dystonia is important. Acquired dystonia results from a brain injury or environmental causes, such as:

Dystonia can also be inherited. Only one parent who carries the gene is needed to pass dystonia to their child. In some instances, children who inherit the gene may not develop dystonia.

How is Dystonia Diagnosed?

Diagnosing dystonia in children can be difficult, as there is no specific diagnostic test. Dystonia can be diagnosed by a neurologist through various tests. The neurologist will need to examine the symptoms and the nature of the abnormal movements or muscle contractions. Using patient and family history, they can work to rule out other conditions. Some diagnostic tools to identify dystonia include:

Dystonia is an uncommon condition, and its symptoms can be similar to those of other disorders, making it easy to misdiagnose. Common misdiagnoses may include tremors, tics, orthopaedic conditions, muscle spasms or seizures.

How is Dystonia Treated?

Various treatment methods will be determined based on the severity of symptoms, the type of dystonia and the cause. These can vary from patient to patient and may include the following:

Physical therapy helps increase a child’s movement and function by improving their motor development and strength. Occupational therapy helps to improve important skills for daily life like eating, getting dressed, etc. Speech therapy works on improving a variety of dystonia symptoms, like speech, memory and voice. Children with dystonia often struggle with these, depending on the region the dystonia is in.

The severity of dystonia can be minimized with medication. Some medication options are ones that affect the levels of dopamine, such as carbidopa-levodopa, or ones that suppress abnormal nerve signals, like baclofen.

A botulinum toxin like Botox can be injected into the affected muscles to help relax them and lessen the involuntary contractions.

Deep Brain Stimulation (DBS) is a surgical treatment for uncontrolled movements. DBS involves electrodes placed in the brain that connect to a stimulator device placed in the chest. The device sends electrical stimulation to the electrodes that can limit dystonic movement and posture. There are two types of DBS surgeries: a two-stage and a three-stage. In the two-stage surgery, during the first stage the patient is awakened briefly in surgery to allow the doctors to determine which areas control the involuntary movements and where in the brain to place the electrodes. In the second stage, a stimulator (similar to a pacemaker) is then placed in the chest and connected to the electrodes. In the three-stage surgery, pioneered by CHOC neurologist and Chief Scientific Officer Dr. Terence Sanger, the child does not need to be awakened in the operating room. The first stage involves placement of 8-12 temporary depth electrodes in the brain. After surgery, stimulation can be tested in each area during a brief inpatient stay. This can identify the specific areas of the brain DBS will be most helpful in treating each child’s individual dystonia and allows for more precise electrode placement. After testing, the temporary electrodes are removed. About 2 weeks later, permanent electrodes are placed in the optimal area(s) (second surgery), followed by placement of the stimulator in the chest (third surgery). DBS is recommended early on for treatment of certain types of dystonia caused by genetic mutations, though not all genetic dystonia responds to DBS. Patients who have secondary dystonia typically trial medication first, then move to DBS treatment if needed. Though DBS requires surgery, this treatment can benefit children whose dystonia has not responded to other treatments.

Children with dystonia can often benefit from activities that help build strength and coordination, such as yoga, pilates, karate and dance. These and massage can also help with maintaining range of motion and preventing development of contractures from prolonged dystonia. If spasms are painful, acupuncture and heat/cold therapy can be beneficial.

Emotional Support for Children with Dystonia

Children with dystonia can struggle with depression and anxiety due to the frustration and pain associated with dystonia. Pediatric mental healthcare can help families work through these issues and establish coping mechanisms for a better outlook on diagnosis, treatment and life. Families may also benefit from finding online or in-person support groups through local or national dystonia organizations.

If you are concerned your child may have dystonia, discuss their symptoms with their pediatrician. Ask your pediatrician for a referral to the expert pediatric neurologists and movement disorder specialists at CHOC for further evaluation. Visit our Neuroscience Institute page for more information.

As a parent, your top priority is choosing a hospital and team of doctors who can provide the best outcome for your child. The CHOC Neuroscience Institute is a place dedicated to caring for kids with complex and rare medical issues. Our specialists have devoted their training, research and practice to caring specifically for children. 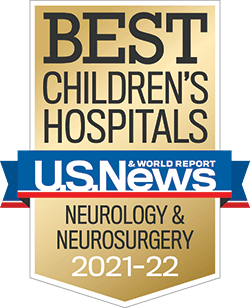