We understand it can be overwhelming to have a child with a liver disease or disorder and you might not know where to start. At the CHOC Children’s liver clinic, our board-certified and pediatric-trained specialists  provide comprehensive care for a full spectrum of liver diseases.

We treat your child with a multidisciplinary team that includes gastroenterologists, dietitians and surgeons, if needed, to treat and manage liver disease so that your child can get back to being a kid. 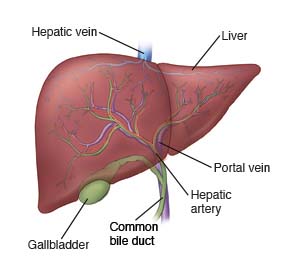 Liver disease refers to any damage or disorder that limits or reduces the function of the liver. It can be genetic (inherited) or acquired (something that develops because of infection, unhealthy behaviors or habits, or exposure to certain toxins).

The liver is located in the upper right-hand portion of the abdominal cavity, beneath the diaphragm and on top of the stomach, right kidney and intestines. It has two main lobes, both of which are made up of eight segments. The segments are made up of a thousand lobules. The lobules are connected to small ducts that connect with larger ducts to ultimately form the common hepatic duct. The common hepatic duct transports bile produced by the liver cells to the gallbladder and duodenum (the first part of the small intestine).

The liver’s main jobs are to control most chemical levels in the blood and excrete a product called bile. Bile helps to break down fats, preparing them for further digestion and absorption. All of the blood leaving the stomach and intestines passes through the liver. The liver processes this blood and breaks down, balances and creates nutrients for the body to use. It also metabolizes drugs in the blood into forms that are easier for the body to use.

Liver Diseases We Treat at CHOC

At CHOC Children’s we work with patients and their families to diagnose and treat a variety liver diseases including:

Biliary atresia is a chronic, progressive liver problem that becomes evident shortly after birth. In biliary atresia, bile ducts in the liver are blocked. When the bile is unable to leave the liver through the bile ducts, the liver becomes damaged and many vital body functions are affected. Learn more about biliary atresia.

A choledochal cyst is a congenital anomaly of the duct that transports bile from the liver to the gall bladder and small intestine. The liver produces bile to help digest food. When a child has a choledochal cyst, a swelling of that duct, bile may back up in the liver. This can cause liver problems or inflammation of the pancreas (pancreatitis) because it blocks the main duct from the pancreas gland to the intestine.

Cirrhosis is damage to the liver that decreases blood flow through it over time. As the normal liver tissue is lost, nutrients, hormones, drugs and poisons are not processed by the liver as they should. In addition, protein production and other substances produced by the liver are decreased or stopped all together. Learn more about cirrhosis.

Hepatitis is an inflammation of the liver and can result in liver cell damage and destruction. Hepatitis is a concern because it often originates from a virus and can be spread to others. Learn more about hepatitis.

Bile ducts serve as passageways to drain bile from the liver. In primary sclerosing cholangitis (PSC), inflammation causes the bile ducts to become too narrow and eventually they are blocked completely.

In addition to a physical examination and medical history when diagnosing liver disease, a child’s doctor may request:

When diagnosing liver disease, the doctor looks at the patient's symptoms and conducts a physical examination. Common symptoms of liver disease in children include:

Jaundice is a yellow discoloration of the skin and whites of the eyes due to abnormally high levels of bilirubin (bile pigment) in the bloodstream. Urine is usually dark because of the bilirubin excreted through the kidneys. High levels of bilirubin may be attributed to inflammation, or other abnormalities of the liver cells, or blockage of the bile ducts. Sometimes, jaundice is caused by the breakdown of a large number of red blood cells, which can occur in newborns. Jaundice is usually the first sign, and sometimes the only sign, of liver disease. Learn more about jaundice.

Cholestasis means any condition in which bile flow is reduced or stopped. "Chole" refers to bile and "stasis" means "not moving." Bile flow may be blocked inside the liver, outside the liver or in both places. Learn more about cholestasis.

Liver enlargement is usually an indicator of liver disease, although there are usually no symptoms associated with a slightly enlarged liver (hepatomegaly). Symptoms of a grossly enlarged liver include abdominal discomfort or "feeling full."

Esophageal varices are dilated blood vessels within the walls of the lower part of the esophagus that are prone to bleeding. They can appear in people with severe liver disease. A diseased liver can cause portal hypertension, which is high blood pressure in the portal vein. The portal vein supplies the liver with blood. Over time, this pressure causes blood vessels to grow, called collateral blood vessels. These vessels act as channels to divert the blood under high pressure. The extra pressure in these vessels causes them to dilate and become tortuous. These vessels can eventually reach the lower esophagus and stomach and are prone to rupture. The rupture can lead to significant blood loss from vomiting or from lost blood passing through the gastrointestinal tract. Symptoms of esophageal varices may include:

Ascites is fluid buildup in the abdominal cavity caused by fluid leaks from the surface of the liver and intestine. Ascites due to liver disease usually accompanies other liver disease characteristics, such as portal hypertension. Symptoms of ascites may include a distended abdominal cavity, which causes discomfort and shortness of breath. Learn more about ascites.

Liver failure is severe deterioration of liver function. Liver failure occurs when a large portion of the liver is damaged due to any type of liver disorder. Symptoms may include: