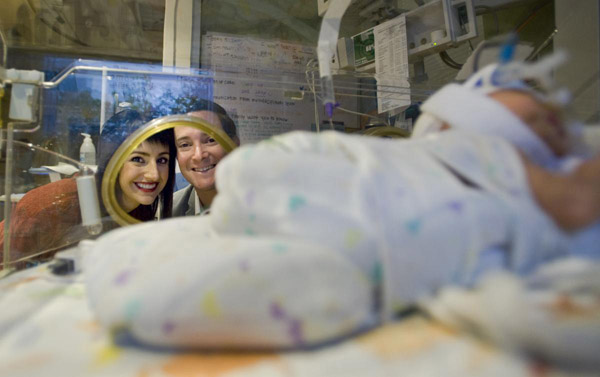 Kingston Marshall wore a tiny Superman costume, designed to fit a small dog, for his first Halloween, spent at Children’s Hospital of Orange County. He will remain in the small baby intensive care unit for Thanksgiving and probably Christmas too.

Kingston was born Sept. 2, more than three months before his due date, weighing 1 pound, 3 ounces.

“He has blessed our lives with so much love and he is stronger than anyone I know,” said his mom, Taylor Marshall, 31, of Anaheim Hills. “He will always be my little superhero.”

Fragile babies like Kingston, the smallest of the small, are the reason CHOC created a specialized intensive care unit five years ago, with dim lights, hushed voices and specially trained nurses. In doing so, administrators hoped to achieve measurable results by reducing some of the biggest health problems extremely premature babies face.

Preterm birth is the top cause of infant death in the United States and a leading contributor to long-term neurological disabilities, according to the Centers for Disease Control and Prevention. Common causes include a pregnancy with multiple babies, infections and chronic maternal conditions such as diabetes and high blood pressure. Often, though, the reason is unknown.

CHOC’s effort has succeeded, according to a paper published last month in the journal Pediatrics. Hospital staff documented that the 12-bed unit has improved outcomes for babies born between 23 and 28 weeks gestation, weighing less than 2.2 pounds. A full-term pregnancy is typically 40 weeks.

“We think a better start leads to a better future,” said CHOC neonatologist John Cleary. “It can be done; it’s hard to do, and one of our great challenges will be to maintain it.”

Mindy Morris, a neonatal nurse practitioner and the program’s coordinator, said specialization and teamwork were essential for the gains.

“The more you do something, the better you are at it,” said Morris, the lead author of the paper. “If we create a team that consistently takes care of this population, we should do better.”

For instance, nurses and other staff, such as respiratory therapists, now work in pairs for every procedure, with one person focusing on calming the baby. Because of the consistent care, nurses also get to know their young patients so well that they notice subtle changes.

“These babies are still supposed to be in utero, in mom, which means they’re in a dark, warm, fluid-filled environment and in that fetal position, which is very comfortable to them,” Morris said. “We can care for these babies in a less stressful manner.”

CHOC used data from two years before the unit opened and four years after for comparison. During that period, the survival rate of the babies also increased from 83 percent to 86 percent.

Despite the improvements, the hospital stay for babies hasn’t decreased, as they need months to mature, typically until around their due date.

Of the roughly 700 patients treated in the neonatal intensive care unit at CHOC each year, about 60 have extremely low birth weight.

“It’s kind of devastating at first, but all the staff here is really good and really explain everything,” Placencio said as she snuggled her boys against her chest. “With twins it’s a roller-coaster ride, one is good and one is bad. Now they’re both in a very good place.”

Placencio said that since her twins can’t be inside her, the small baby unit replicates that experience as much as possible.

“They really try to implement how things are in the womb, the sound and the light, to the massage and the movements. The developmental issues that should have been taking place to their actual due date, they focus on those things,” Placencio said.

“They get physical therapy on their muscles, learn how to suck, how to breastfeed. They teach us, which gives us the knowledge of what they’ve missed.”