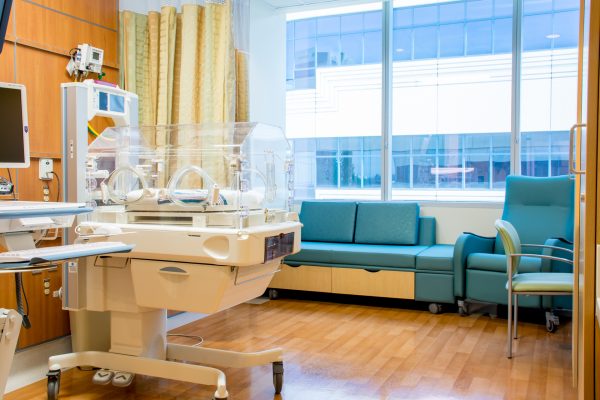 HOC Children’s Hospital today opened its new neonatal intensive care unit (NICU) with 36 all private rooms, a feature that will allow parents the opportunity to stay close to their newborns receiving intensive care.

The 25,000-square-foot unit nearly triples the size of the hospital’s previous Level 4 NICU, which included an open layout that grouped patients in pod-style beds.

“CHOC is proud to offer private rooms to our smallest patients and their parents,” said Dr. Vijay Dhar, medical director of CHOC’s NICU. “No one’s vision of parenthood includes a NICU stay, but our new unit will provide parents with the space and privacy to get to know their new baby, and reassurance that they’ll be nearby while their newborn receives the highest level of care.”

A private-room setting provides space and privacy sought by parents to breastfeed, practice skin-to-skin bonding, and be more intimately involved in their baby’s care. Further, individual rooms allow parents to stay overnight with their newborn, and give staff more access and interaction with the family and patient.

In addition to private rooms, the new space includes other features that will enhance patient care. Should an infant need a sudden surgical procedure, three rooms within the unit can quickly be converted into space for surgeries. The unit will also include a life-saving extracorporeal membrane oxygenation (ECMO) unit. Rooms that adjoin can be used to accommodate triplets.

Safety features include same-handed rooms, wherein equipment is positioned in the same location among all rooms to reduce human error; room-adjacent nursing alcoves; and an in-unit nutrition lab for the preparation of breast milk and formula.

CHOC’s new unit also features a family dining space, a room dedicated for siblings, a lactation room and other amenities to ensure the comfort of the entire family.

The CHOC Children’s Foundation has raised $4,381,984 toward the new NICU, including lead gifts from the Argyros Family Foundation, Credit Unions for Kids, and philanthropist Margaret Sprague.

For several decades, CHOC has served infants requiring the highest level of care. With the unit’s opening, CHOC’s neonatal services now include 72 beds at CHOC Orange and the CHOC Children’s NICU at St. Joseph Hospital, and 22 beds at CHOC Children’s at Mission Hospital. In addition, a team of premier CHOC neonatologists care for babies at hospitals throughout Southern California.

A suite of specialized services comprises the CHOC NICU: the Surgical NICU, which provides dedicated care to babies needing or recovering from surgery; the Small Baby Unit, where infants with extremely low birth weights receive coordinated care; the Neurocritical NICU, where babies with neurological problems are cohorted; and the Cardiac NICU, which provides comprehensive care for neonates with congenital heart defects.