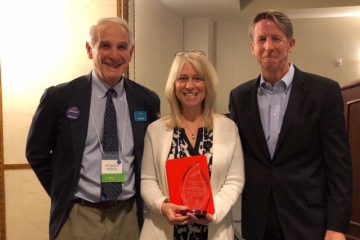 The California Perinatal Quality Care Collaborative (CPQCC), whose mission is to improve the quality of care to pregnant women and the most vulnerable newborns, has named Liz Drake, RNC-NIC, MN, NNP, CNS, clinical nurse specialist in the neonatal intensive care unit (NICU) at CHOC Children’s at Mission Hospital (CCMH), the 2018 winner of the Janet Pettit Memorial Award.  The honor recognizes Drake’s commitment to quality improvement projects that enhance care for newborns in the CCMH NICU and in units across the nation.

Criteria for the award include:

Drake, who has worked for CHOC Children’s for more than 35 years, is active in the neonatal community — locally, regionally and nationally. She is a sought-after speaker who has presented to various organizations including March of Dimes, Vermont Oxford Network and the National Association of Neonatal Nurses. In addition to quality improvement, her areas of interest include team-based care, small baby care and neuroprotective care.  Drake serves on the CPQCC Advisory Board and the Huggies Nurse Advisory Council.

“Liz is an extraordinary nurse leader who has dedicated her career to advancing care for newborns.  She’s a tireless advocate for the most vulnerable infants and their families, and is committed to securing the best possible outcomes,” says Marcia Folli, administrator and chief nursing officer, CCMH.

Among Drake’s most recent accomplishments at CCMH is the creation of “Passion Teams,” for which she inspired staff to be involved in quality improvement projects that engaged their passion, in their areas of expertise, in the care of infants.  The teams have launched multiple projects resulting in improvements in neonatal care.

Part of CHOC Children’s regional pediatric healthcare system, CCMH is a 54-bed licensed children’s hospital located on the fifth floor of Mission Hospital in Mission Viejo, California.  It is the only pediatric-dedicated facility serving families in south Orange County, coastal communities and north San Diego County.  The hospital maintains a full medical staff of physicians in virtually every pediatric specialty, including 24-hour hospitalists and neonatologists on site.