Home » News » 14-Year-Old Girl Survives Coronavirus After 57 Days in Calif. Hospital: ‘COVID Is Not a Joke’

14-Year-Old Girl Survives Coronavirus After 57 Days in Calif. Hospital: ‘COVID Is Not a Joke’

A Southern California teen is speaking out about the importance of taking COVID-19 seriously after she spent nearly two months in the hospital fighting for her life.

Augustina Rojas tells PEOPLE she never expected to be diagnosed with the coronavirus, but that’s exactly what happened to the then 13-year-old when she went to the doctor in early June after feeling ill.

“My head was hurting, I couldn’t breathe,” Augustina, now 14, says. “I thought I was sick, but I thought nothing of COVID. For me, I didn’t think it was real.”

Augustina’s father, José Rojas, says he was also caught off guard by the diagnosis, especially when doctors proceeded to tell his daughter — who had no underlying health conditions and was otherwise healthy — that she needed to get to Children’s Hospital of Orange County (CHOC Children’s) “right away.”

“I was nervous,” he recalls. “It was kind of a surprise… We didn’t know what was going to happen.”

On June 7, Augustina was officially admitted to CHOC Children’s in Orange for respiratory distress. She was initially put on a high-flow nasal cannula, a device that provides supplemental oxygen to patients, before her condition worsened and she required a non-invasive breathing support mask called Bilevel Positive Airway Pressure (BiPAP).

As weeks went by, Augustina required a breathing tube and then a ventilator. At one point, doctors considered putting the teen on an ECMO heat-lung machine, which would provide Augustina with cardiac and respiratory support.

Despite all the physical trauma to her body — which also included two surgeries — Augustina says she has no recollection of the events in the hospital.

“I don’t remember anything — what happened, how I got there. It just happened,” explains the teen, who believes she may have been exposed to the virus by a family member who had previously been exposed.

José, however, says he went through a very different experience as he showed up at CHOC Children’s every day for nearly two months and watched his daughter fight for her life.

“I was very worried and confused… I didn’t know if she would make it or not,” he recalls, adding how he would often speak to Augustina, despite her being sedated. “I know she heard everything. I told her, ‘You’re gonna be okay, nothing is gonna happen to you. You’re gonna be with us again.’ ” 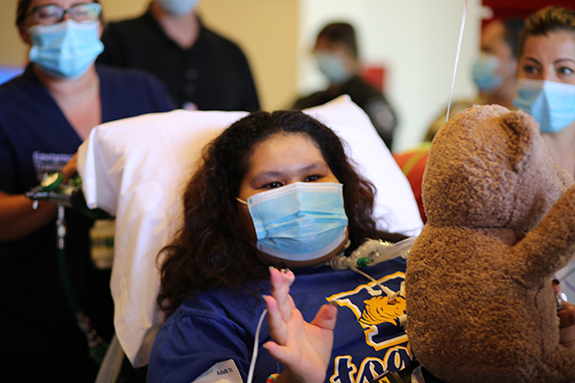 Fortunately, José was right. Toward the beginning of August, the teen’s condition improved after she was given nitric oxide and positioned on her stomach, a technique referred to as proning.

Once it was safe to do so, doctors performed a tracheotomy on Augustina. The procedure ultimately allowed her team to wean her off sedation and ventilator support, and soon, Augustina started to regain consciousness.

“When I first woke up, [I just remember that] I wanted my dad and mom there,” the teen recalls, adding that she was unable to speak for a bit after waking up because she had lost her voice.

“Everyone was surprised,” adds José. “I don’t have the words to say the way I feel.”

After 57 days, Augustina was released from CHOC Children’s. Staffers at the hospital marked the major milestone by providing the teen with a celebratory “cheer tunnel” and applauding her on her way out with posters, streamers and balloons. 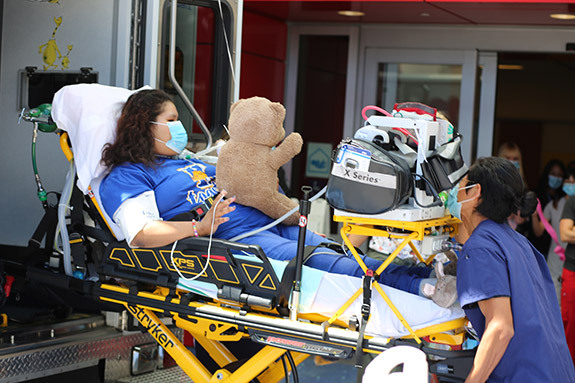 From there, she was sent to Healthbridge Children’s Hospital in Orange, where she began rehabilitation to relearn how to perform basic tasks, including sitting up, standing and walking.

“It was really nice,” the teen says of her weeks-long rehab process. “I just wanted to go back to my normal life and do everything I used to.”

While she was recovering, Augustina also marked another milestone: celebrating her 14th birthday on Aug. 28.

“It was great to celebrate my birthday because I had been in the hospital for a long time and I was just ready to move on and go home,” says the teen, who was officially discharged from the rehab facility on Aug. 31 and returned home after 85 days.

As she settles back into her “normal life,” feeling as well as she felt prior to contracting COVID, Augustina says she’s taking extra safety precautions now and is urging others to do the same — even if they’re young.

“I’m always wearing my mask now,” she shares. “I didn’t believe it was real but people should protect themselves because COVID is not a joke. Little kids or adults can get sick. People need to wear masks and protect everyone and everything.”

As of Friday, there have been at least 776,944 cases and 14,807 deaths attributed to coronavirus in California, according to the New York Times.