A Hodgkin lymphoma diagnosis can be overwhelming for families. We understand that a parent’s priority is to understand their child’s options and feel confident in a treatment plan. That’s why our specialists at the Lymphoma Treatment Program provide exceptional care, compassion and open communication throughout treatment. 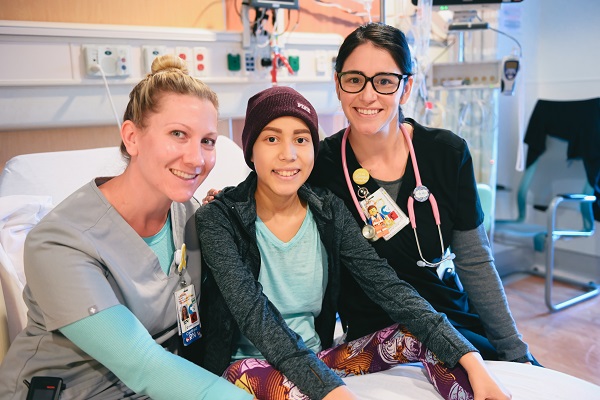 What is Hodgkin lymphoma?

Hodgkin lymphoma (HL) is a cancer that starts in the lymphatic nodes, and later can spread over different organs and systems throughout the body. The malignant cells in HL are called a Reed-Sternberg cell. Most cases of Hodgkin lymphoma – 9 out of 10 – are classic Hodgkin lymphoma (cHL), which is further classified into four sub-types, three of which are more likely to occur in children.

Nodular Lymphocyte Predominant Hodgkin’s Lymphoma (NLPHL) is a rare variant of HL, which is more common in boys and usually presents in early stages. Some cases can progress to a rare type on B-call Non-Hodgkin’s lymphoma.

What are the causes and risk factors of Hodgkin lymphoma?

Genetic factors and some viral infections may increase a child’s risk of having Hodgkin lymphoma, but the exact cause is not known.
Conditions that are known risk factors for Hodgkin lymphoma include:

What are the symptoms?

Symptoms of Hodgkin lymphoma can mimic other common childhood illnesses. Some common signs include:

How is Hodgkin lymphoma diagnosed and staged in children?

Your child’s pediatrician will ask about your child’s medical history and symptoms. After examining your child, the doctor may order tests such as:

Diagnosing Hodgkin lymphoma also includes staging the cancer. Staging is the process of seeing if and where the cancer has spread, and it helps your care team decide on a treatment plan.. There are 4 stages of HL:

How is Hodgkin lymphoma treated?