What is Gastroesophageal Reflux Disease (GERD)?

GERD is very common in infants, and is the most common cause of vomiting during infancy, as infants are more likely to experience weakness of the LES muscle, allowing it to relax when it should remain shut.

Gastroesophageal reflux (GER) is the return of acidic stomach juices, or food and fluids, back up into the esophagus. Everyone has Gastroesophageal reflux (GER) GERD from time to time. Anyone who has ever burped and had an acid taste in their mouth has had reflux. The lower esophageal sphincter occasionally relaxes at inopportune times, and usually, all your child will experience is a bad taste in the mouth, or a mild, momentary feeling of heartburn.

GER occurs in more than two-thirds of healthy infants, and half of these infants experience regurgitation or “spitting up” that spontaneously resolves without medication by approximately 1 year of age. When the reflux causes intolerable discomfort or complications, patients should be evaluated by a doctor for gastroesophageal reflux disease (GERD).

Your child may be experiencing gastroesophageal reflux disease (GERD) if they experience: 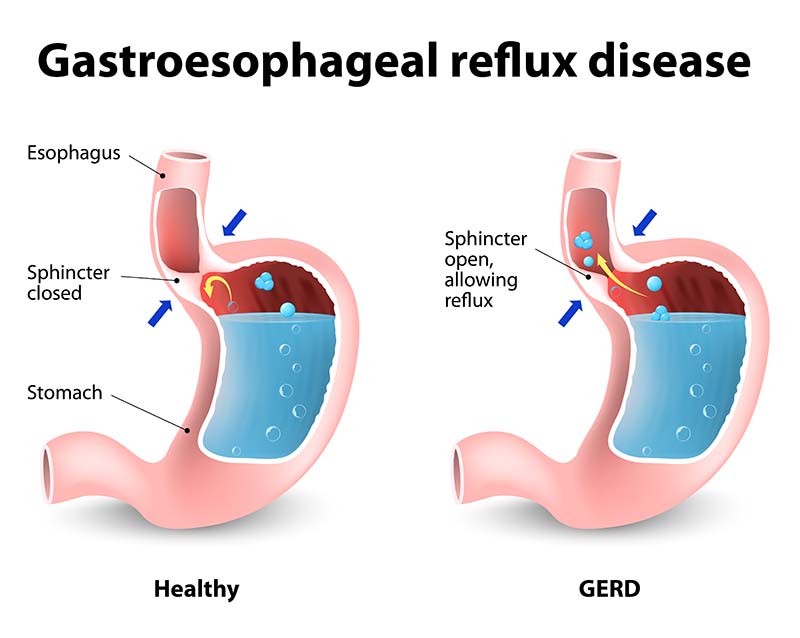 What Causes GERD in Kids?

Gastroesophageal reflux disease (GERD) in kids is usually caused by immaturity of the LES that results in weakness of the muscle. However, certain foods, medications, developmental disorders and underlying diseases can also cause GERD in children.

Foods that can cause GERD

Some foods seem to affect the muscle tone of the lower esophageal sphincter (LES), allowing it to stay open longer than normal. These include, but are not limited to:

Other foods increase acid production in the stomach, resulting in heartburn when reflux occurs, including:

Medications that can cause GERD

Medications and dietary supplements that can irritate your child’s esophagus and lead to GERD include:

If your child has GERD, ask their doctor if medications they take may affect their symptoms.

The following conditions may increase the likelihood of your child developing GERD:

What is eosinophilic esophagitis?

Eosinophilic esophagitis also known as EoE, is a disease in which eosinophils (allergy cells) build up in the lining of the esophagus. Although the cause is not clear, research has shown a strong connection between food allergies and EoE. Environmental allergens may also play a role in this disease but more research is needed. Many patients with EoE also experience gastroesophageal reflux disease (GERD). Learn more about the Eosinophilic Esophagitis Program at CHOC.

Why is GERD a Concern in Kids?

Heartburn, also called acid indigestion, is the most common symptom of GERD. Heartburn is described as a burning chest pain that begins behind the breastbone and moves upward to the neck and throat. It can last as long as two hours and is often worse after eating. Lying down or bending over after a meal can also contribute to heartburn. Many children who are diagnosed with GERD will experience a dry cough, wheezing or trouble swallowing, instead of classic heartburn. Although each child may experience symptoms differently, signs of GERD in infants can include:

Symptoms in children may include:

The symptoms of GERD often resemble those of other gastrointestinal conditions, including eosinophilic esophagitis. At CHOC, we thoroughly assess each patient to ensure proper diagnosis.

How is GERD Diagnosed?

In some cases, other diagnostic tests will be used to help determine whether the child has GERD or another gastrointestinal condition:

Endoscopy. A test that uses a small, flexible tube with a light and a camera lens at the end (endoscope) to examine the inside of part of the digestive tract. Tissue samples from inside the digestive tract may also be taken for examination and testing. Learn more about endoscopy procedures at CHOC.

pH monitoring. Used to measure the acidity inside of the esophagus, this test is helpful in evaluating the extent of GERD. A thin plastic tube is placed into a nostril, guided down the throat, and then into the esophagus. The tube stops just above the lower esophageal sphincter, which is at the connection between the esophagus and the stomach. The end of the tube inside the esophagus contains a sensor that measures pH, or acidity. The other end of the tube outside the body is connected to a monitor that records the pH levels for a 24- to 48-hour period. Normal activity is encouraged during the study, and a diary is kept of symptoms experienced, or activity that might be suspicious for reflux, such as gagging or coughing. It is also recommended to keep a record of the time, type, and amount of food eaten. The pH readings are evaluated and compared with the patient’s activity for that time period to help determine possible GERD triggers.

Bravo pH studies. In older children, the pH study can be done without an external wire. At the end of the upper endoscopy, the physician attaches a small capsule (approximately the same size as a pencil eraser) to the wall of the esophagus. The capsule sends information to a device outside the child’s body that records reflux events. This data collection device is about the size of a cell phone and can be attached to the child’s belt or waistband. The device needs to be within 3 feet of the patient during the 48 hours of recording time. Some patients say that they can feel the capsule while it is in place, causing mild, temporary discomfort. After the second day of collecting information about the child’s reflux, the Bravo capsule falls off the lining of the esophagus, travels through the gastrointestinal tract and is eventually passed in the patient’s stool. It does not have to be retrieved.

When symptoms of GERD aren’t improved with diet and lifestyle changes, or in more severe cases, treatment can also include:

Medications. If needed, our specialists may prescribe medications to help with reflux. There are medications which help decrease the amount of acid the stomach makes, which cuts down on the heartburn associated with reflux. One group of this type of medication is called “H2-blockers.” Medications in this category include famotidine (Pepcid) and ranitidine (Zantac). Another group of medications is called “proton-pump inhibitors.” Medications in this category include omeprazole (Prilosec) and lansoprazole (Prevacid). These medications are taken daily to prevent excess acid secretion in the stomach. Another type of medicine we may prescribe is one that helps the stomach empty faster. If food does not remain in the stomach as long as usual, there may be less chance of reflux occurring. A medicine in this category that can be prescribed is metoclopramide (Reglan) or a very low dose of the antibiotic erythromycin. This medicine is usually taken three to four times a day, before meals or feedings, and at bedtime.

Tube feedings. Some babies with reflux have other conditions, such as congenital heart disease or prematurity. In addition to having reflux, these babies may not be able to eat or drink very much without becoming sleepy. Other babies are not able to tolerate a normal amount of formula in the stomach without vomiting and do better if a small amount of milk was given continuously. In both of these cases, tube feedings may be recommended. Formula or breast milk is given through a tube that is placed in the nose, guided through the esophagus, and into the stomach (nasogastric tube). Nasogastric tube feedings can be given in addition to or instead of what a baby takes from a bottle.

Surgery. In severe cases of reflux, a surgical procedure called fundoplication may be performed. This operation may be recommend if the child is not gaining weight due to vomiting, has frequent, severe respiratory illnesses such as pneumonia or has severe irritation in the esophagus. Learn more about surgery at CHOC.

What is the long-term outlook for a child with GERD?

Many infants who suffer from gastroesophageal reflux disease will “outgrow it” by the time they are about a year old, as the lower esophageal sphincter becomes stronger. For others, medications, lifestyle, and diet changes can minimize the reflux, vomiting and heartburn caused by GERD.

GER occurs in more than two-thirds of healthy infants, and half of these infants experience regurgitation or “spitting up” that spontaneously resolves without medication by approximately 1 year of age. When the reflux causes intolerable discomfort or complications, patients should be evaluated by a doctor for gastroesophageal reflux disease (GERD).

Learn more about the symptoms of GER and lifestyle changes your child can make.