Pyloric stenosis is a problem that affects babies between birth and six months of age and causes forceful vomiting that can lead to dehydration. It is the second most common problem requiring surgery in newborns.

The lower portion of the stomach that connects to the small intestine is known as the pylorus. In pyloric stenosis, the muscles in this part of the stomach enlarge, narrowing the opening of the pylorus and eventually preventing food from moving from the stomach into the intestine. 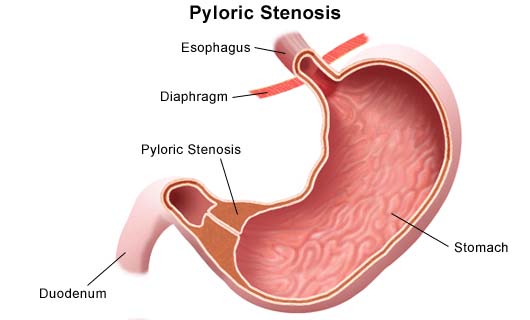 Which babies are at higher risk for pyloric stenosis?

Why is pyloric stenosis of concern?

Because the stomach opening becomes blocked and babies start vomiting, several problems can happen. The most serious problem is dehydration. When a baby vomits regularly, he or she will not get enough fluids to meet his or her nutritional needs. Babies have smaller bodies than adults and cannot tolerate losing fluid as easily as adults can. Minerals that the body needs to stay healthy, such as potassium and sodium, are also lost as the baby vomits. Babies who lack the right amount of water and minerals in their bodies can become very sick quickly.

Another problem that occurs is weight loss. A baby who vomits most of or all of his or her feedings will not have adequate nutrition to gain weight and stay healthy.

What are the symptoms of pyloric stenosis?

The most common symptoms in a baby with pyloric stenosis is forceful, projectile vomiting. Large amounts of breast milk or formula are vomited, and may go several feet across a room. This kind of vomiting is different from a “wet burp” that a baby may have at the end of a feeding. The baby is usually quite hungry and eats or nurses eagerly. The milk is sometimes curdled in appearance, because as the milk remains in the stomach and does not move forward to the small intestine. The stomach acid curdles it.

Other symptoms may include:

The symptoms of pyloric stenosis may resemble other conditions or medical problems. Always consult your child’s doctor for a diagnosis.

How is pyloric stenosis diagnosed?

In addition to a complete medical history and physical examination, diagnostic procedures for pyloric stenosis may include:

What is the treatment for pyloric stenosis?

Pyloric stenosis is often repaired with an operation. However, doctors may need to treat your baby’s dehydration and mineral imbalances first. Water and minerals can be replaced through intravenous (IV) fluid.

Once your baby is no longer dehydrated, surgery can be performed. Under anesthesia, a small incision is made above the navel and the tight pyloric muscle is repaired.

What is the recovery time for pyloric stenosis surgery?

Babies can often begin drinking small amounts of clear liquids in the first 24 hours. Generally, clear liquids, such as an electrolyte drink, will be given to your baby first. It is less common that babies may still vomit for several days after surgery due to swelling at the site of repair of the pyloric muscle. The swelling goes away within a few days.

Most babies will be taking their normal feedings by the time they go home. Babies are usually able to go home within two to three days after the operation.

What is the long-term prognosis for pyloric stenosis?

Pyloric stenosis is unlikely to recur. Babies who have undergone the surgery should have no long-term side effects.