All cancer patients, no matter where they receive treatment, undergo a great deal of diagnostic testing that begins at the initial appointment and continues throughout their treatment and follow-up care in the years after treatment has ended. Because diagnostic testing is such a large part of every patient’s journey, we are proud to be able to provide our patients with everything they will need without having to leave CHOC.

Biopsies involve taking a sample of tissue and then studying it in the laboratory. In a needle biopsy, a tissue sample is removed through a thin needle inserted into the tumor. Sometimes, surgery is required to remove the tissue. This is called an “excisional” or “incisions” biopsy, and is usually performed in an operating room by either surgeons or radiologists while the child is under general anesthesia.

Doctors use bone marrow aspiration (also referred to as a “bone marrow biopsy”) to diagnose and monitor certain cancers. Bone marrow, which is liquid and looks like blood, is found inside some bones of the body and where many forms of cancer begin or spread. Examining a sample of bone marrow under a microscope is the only test that can confirm the presence of certain cancers such as leukemia. A sample of bone marrow is usually removed, or “aspirated,” from the hip bone through a special needle while the child lies on his stomach or side.

Bone scans provide information about the bones in the body. Before the scan can be done, the child will have a radioactive material (isotope) injected intravenously. Then, the child will drink a large volume of water to help move the isotope in the blood stream. The actual scan does not take place for three to six hours. If a tumor has affected a bone, it will appear on the scan as an area of increased update of the radioactive material.

A spinal tap or lumbar puncture is performed while a child lies on his or her side with legs curled up to the chest. A needle is placed between the small bones of the back to collect cerebrospinal fluid (CSF), which surrounds the brain and spinal cord. Doctors examine this fluid to check for certain cancers known to spread to the CSF.

Computed tomography scans, also known as CT scans, are diagnostic tests that use special X-ray equipment to obtain cross-sectional pictures of the body. CT scans give the treatment team detailed images of organs, bones and other tissues, and are used in cancer diagnoses in several ways:

Magnetic resonance imaging, also known as an “MRI” is a test similar to a CT scan but uses powerful magnets instead of X-rays to take pictures of body tissues using radio waves. These radio waves are not harmful to tissues, and the procedure is painless. Sometimes, children may require sedation for this procedure because they must remain absolutely still.

Ultrasounds are painless procedures that use sound waves to examine internal body structures or tumors. The child lies down and lotion is spread over the area to be scanned. A probe is then rubbed over the area and a video image can be seen on a monitor. This is the same procedure most women undergo while pregnant so that they can see images of their baby in the womb.

Tumor markers tests measure the amount of chemicals (tumor markers) in the body when cancer is present. These markers are often measured using blood and/or urine tests and are examined in a laboratory. These tests are done at the time the child is diagnosed and are repeated periodically, if positive, to determine the response of the tumor to therapy. Not all childhood cancers have tumor markers.

Electroencephalogram, also known as “EEG,” is a recording of the electrical waves in the brain. It measures electrical impulses that are sent between nerve cells. This diagnostic device can help doctors localize brain tumors and other lesions, and determine whether cancer has spread to the brain. An EEG uses small electrodes to measure the electrical activity within the brain. It does not deliver any electricity of its own. The technician uses a paste to attach 23 small electrodes to the patient’s scalp. The electrodes carry information about the brain’s electrical activity to an amplifier. A special machine records the amplified brain waves, and produces a pattern of tracings called an electroencephalogram. While EEG is primarily used to complement CT and MRI studies, it provides the only continuous measure of cerebral function over time.

Electrocardiogram, also known as “EKG,” evaluates the conduction system of the heart. Small electrode patches are placed on the chest, wrist and ankles and are connected to a machine that traces the electrical activity of the heart.

An audiogram test measures a child’s hearing. During this test, the child wears earphones and is asked to indicate by raising his or her hand when he or she hears the tone. This tone will vary in volume and sound frequency. The test is painless and takes only a few minutes to complete. It is necessary that this test be performed in a room that is quiet. If there is too much noise in the child’s hospital room, it may be necessary to take the child to one of the treatment rooms where it is quieter, in order to perform this test.

Brainstem audio evoked response, also known as “BAER,” is a test that measures hearing in children too young to cooperate for the audiogram. Sedation is given and small electrodes are placed on the child’s head and then connected to a machine. The child’s response to sounds is then measured by the electrical impulses recorded.

Pulmonary function test, also known as “PFT,” is a group of tests that measures breathing and lung function. Usually only children old enough to cooperate with several instructions can perform these tests. These children are instructed to breathe into a machine that measures the capacity of their lungs. Occasionally, a small blood sample is needed to complete this testing.

Surgical Services at the Tidwell Procedure Center at CHOC

Some diagnostic procedures may be done as part of an inpatient or outpatient stay at the state-of-the-art Tidwell Procedure Center at CHOC. Families are encouraged to learn more about: 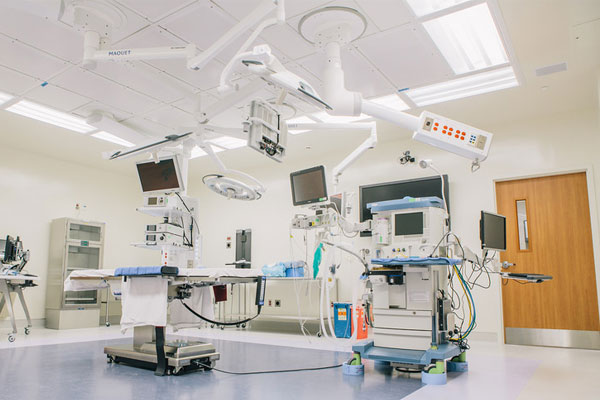