An ulcer is an open sore, or lesion, usually found on the skin or mucous membrane areas of the body: 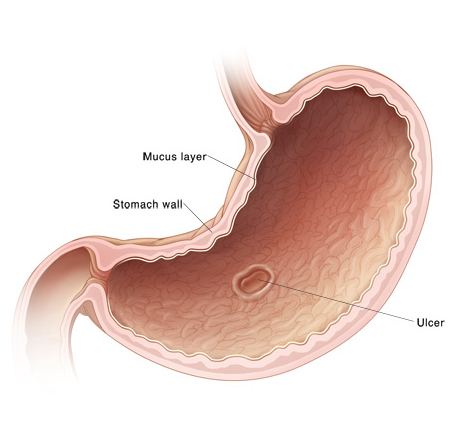 What causes gastric and duodenal ulcers?

In adolescents and young adults additional causes can include:

What are the symptoms of gastric and duodenal ulcers?

Although ulcers do not always cause symptoms, the most common ulcer symptom is a burning pain in the chest and upper abdomen. The pain often occurs between meals and in the morning. It may last from a few minutes to a few hours. Less common ulcer symptoms include:

The symptoms of stomach and duodenal ulcers may resemble other digestive conditions or medical problems. It is important to speak with a pediatric gastroenterologist if you suspect your child has an ulcer.

What are some complications from ulcers?

Without proper treatment, people with ulcers may experience serious complications. The most common problems include:

How are ulcers diagnosed?

Because treatment protocols may be different for different types of ulcers, it is important to properly diagnose the cause of a child’s ulcer before determining the right plan for treatment. In addition to a complete medical history and physical examination, diagnostic procedures for ulcers may include:

What is the treatment for stomach and duodenal ulcers?

Each child’s ulcer treatment is determined on a case-by-case basis. CHOC pediatric gastroenterologists work with each patient, his or her family, as well as referring physicians and other medical specialists as necessary in order to create a treatment plan that is mindful of your child’s medical, physical, social and emotional needs both now and in the future. Specific treatment is determined based on the following:

In the past, doctors advised people with ulcers to avoid spicy, fatty or acidic foods. However, a bland diet is now known to be ineffective for treating or avoiding ulcers. No particular diet is helpful for most ulcer patients. If it seems that certain foods cause irritation, please discuss the problem with your child’s doctor.

Recommended treatment may include:

Helicobacter pylori – The Cause of Most Ulcers

Helicobacter pylori (H. pylori) is a bacterium that produces substances that weaken the stomach’s protective mucus and make it more susceptible to the damaging effects of acid and pepsin, thus creating ulcers. Learn more about H. pylori.