The majority of children with malrotation develop symptoms within the first year of life. The younger the child, the more pronounced and steady the symptoms might be. Vomiting and abdominal pain are the most common symptoms and are consistent with an acute bowel obstruction (because of a volvulus or Ladd’s bands). An infant with these symptoms must be considered for urgent evaluation. Malrotation is rarely seen in older children, and when it does occur, symptoms may occur every once in a while. Some people who have malrotation go through their entire life without having any symptoms and are never diagnosed. Others may not develop symptoms until adolescence or adulthood.

A volvulus is a twist in the malrotation that causes an intestinal blockage. 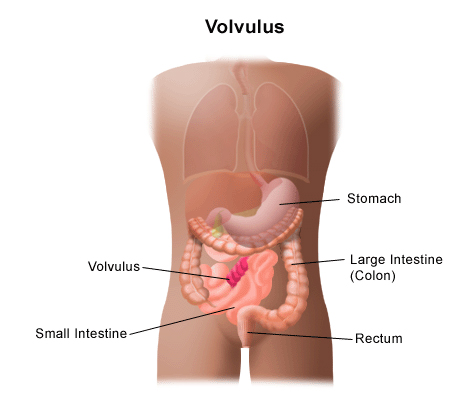 Who is at risk for having malrotation?

Malrotation occurs equally in boys and girls. However, more boys have symptoms by the first month of life than girls.

Why is intestinal malrotation a concern?

Ladd’s bands, formed between the cecum and the intestinal wall, can also create a blockage in the duodenum as a result of malrotation, preventing food from being digested.

A child can become dehydrated quickly when intestinal blockage occurs. The younger the child the more quickly dehydration occurs.

What are the symptoms of malrotation and volvulus?

The following are the most common symptoms of malrotation and volvulus. However, each person may person symptoms differently. When the intestine becomes twisted or obstructed, the symptoms may include:

The symptoms of malrotation and volvulus may look like other conditions or medical problems. Consult your child’s doctor for a diagnosis.

How is malrotation and volvulus diagnosed?

In addition to a physical exam and medical history, diagnostic procedures for malrotation and volvulus may include various imaging studies (tests that show pictures of the inside of the body). These are done to evaluate the position of the intestine, and whether it is twisted or blocked.

These tests may include:

Learn more about blood tests and imaging studies at CHOC.

What is the treatment for malrotation and volvulus?

Specific treatment for malrotation and volvulus will be determined by your child’s doctor based on the following:

Malrotation without volvulus is often repaired surgically with the Ladd’s procedure.

Malrotation of the intestines is not usually evident until the intestine becomes twisted (volvulus) or obstructed by Ladd’s bands and symptoms are present. A volvulus is considered a life-threatening problem, because the intestine can die when it is twisted and does not have adequate blood supply.

Children may be started on IV (intravenous) fluids to prevent dehydration and antibiotics to prevent infection. A tube called a nasogastric (or NG) tube may be guided from the nose, through the throat and esophagus, to the stomach to prevent gas buildup in the stomach.

A volvulus is usually surgically repaired as soon as possible. The intestine is untwisted and checked for damage. Ideally, the circulation to the intestine will be restored after it is unwound, and it will turn pink.

If the intestine is healthy, it is replaced in the abdomen. Since the appendix is located in a different area than usual, it would be difficult to diagnose appendicitis in the future. An appendectomy (surgical removal of the appendix) is also usually done.

If the blood supply to the intestine is in question, the intestine may be untwisted and placed back into the abdomen. Another operation will be done in 24 to 48 hours to check the health of the intestine. If it appears the intestine has been damaged, the injured section may be removed.

If the injured section of intestine is large, a significant amount of intestine may be removed. In this case, the parts of the intestine that remain after the damaged section is removed cannot be attached to each other surgically. A colostomy may be done so that the digestive process can continue. With a colostomy, the two remaining healthy ends of intestine are brought through openings in the abdomen. Stool will pass through the opening (called a stoma) and then into a collection bag. The colostomy may be temporary or permanent, depending on the amount of intestine that needed to be removed. 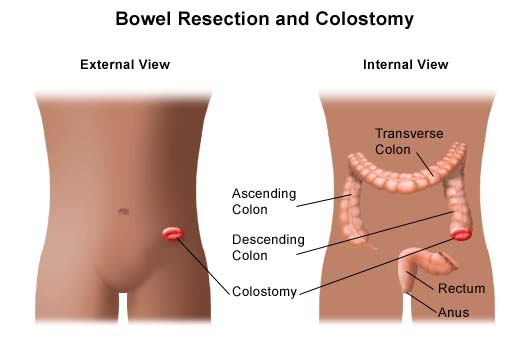 The majority of children with malrotation and symptoms that required surgery do not have long-term problems. They do tend be at higher risk for symptoms of gastroesophageal reflux.

The majority of children with malrotation who experienced a volvulus do not have long-term problems if the volvulus was repaired promptly and there was no intestinal damage.