The Inflammatory Bowel Disease (IBD) Program at CHOC works with Crohn’s disease patients and their families to diagnose, treat and manage the symptoms of Crohn’s disease throughout childhood and into early adulthood. We understand that learning a child may have Crohn’s disease can feel overwhelming. It is natural for families and patients to have a lot of questions about the disease and what life will be like in the future. Our experts have put together answers to the most frequently asked questions about Crohn’s disease and our approach to managing the disease at CHOC. Learn more about the Inflammatory Bowel Disease Program at CHOC. 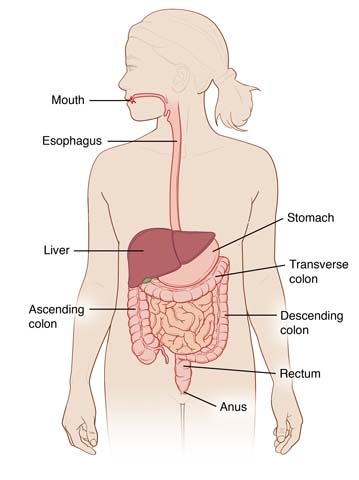 What is Crohn’s disease?

Crohn’s disease is type of inflammatory bowel disease (IBD). It is a chronic condition that may recur at various times over a lifetime. It usually involves the small intestine, most often the lower part called the ileum. In some cases, both the small and large intestine are affected. Inflammation may affect one or more locations in the digestive tract, including the mouth, esophagus, stomach, small intestine, large intestine, appendix and anus.

No one knows for sure what causes Crohn’s disease or why it shows up when it does. We do know that people who have a family member with IBD are more likely to develop Crohn’s disease. One theory suggests that something, perhaps a virus or bacteria, affects the body’s immune system and triggers an inflammatory reaction in the intestinal wall. There is evidence that patients with this disease have abnormalities of the immune system. It is not known, however, whether the immune problems are a cause or a result of the disease. Nutrition may also play a role in the cause of Crohn’s disease.

Who is affected by Crohn’s disease?

While Crohn’s disease may affect people of all ages, the age group most often affected is 15 to 35 years. Crohn’s may also be seen in young children. Males and females are affected equally. It appears to run in some families, with about 20 percent of people with Crohn’s disease having a blood relative with some form of inflammatory bowel disease.

What are the symptoms of Crohn’s disease?

The following are the most common symptoms for Crohn’s disease. However, each child may experience symptoms differently. Symptoms may include:

Crohn’s disease may develop very slowly in some people with mild symptoms that may exist for years before diagnosis. After diagnosis, some people may have long periods of remission when they are free of symptoms, sometimes lasting for years. It may be difficult to predict when a remission may occur or when symptoms will return. It is important to get care from a physician experienced in diagnosing and caring for IBD. The symptoms of Crohn’s disease may resemble other conditions or medical problems. It is important to get a proper diagnosis from a doctor who specializes in treating pediatric gastrointestinal conditions.

How is Crohn’s disease diagnosed?

Children and adolescents who have experienced chronic abdominal pain, diarrhea, fever, weight loss, growth failure and anemia may be examined for signs of Crohn’s disease. In addition to a complete medical history and physical examination, diagnostic procedures for Crohn’s disease may include:

What is the treatment for Crohn’s disease?

At this time there is no cure for Crohn’s disease. However, there are things that can be done to help control Crohn’s disease. At CHOC, treatment plans are developed based on each patient’s unique medical, physical, social and emotional needs.

The goals of treatment may include:

Specific treatment is determined by your child’s doctor based on the following:

Medication therapy. Your child’s gastroenterologist may recommend one or a combination of medications that will help the intestine heal. The classes of medications available include aminosalicyclates, antibiotics, corticosteroids, immunomodulators and biologic therapies.

Diet and vitamin supplements. No special diet has been proven effective for preventing or treating Crohn’s disease. No specific food can be blamed as the cause of Crohn’s disease. Good nutrition should be one important part of a complete treatment plan. Vitamin and mineral supplements can be very important in the healing process, especially iron, zinc, calcium and vitamin D. Probiotics may be an important addition to help control symptoms.

Children with Crohn’s disease may lose weight because they are not getting enough calories because:

Some dietary changes may help control symptoms. In some cases symptoms are made worse by milk, alcohol, hot spices or fiber, but this may not be true for everyone. Large doses of vitamins are not an effective treatment and may even cause harmful side effects. Our gastroenterologist and dietitian can work with patients and families to determine possible foods to avoid and foods to emphasize.

The use of nutritional therapies as a sole treatment for Crohn’s disease is a controversial topic that needs discussion on a case-by-case basis. Nutritional supplements or special high-calorie liquid formulas may sometimes be suggested. It is rare, but possible, that a patient will need intravenous (by vein) feeding to support their nutrition during challenging stages of their treatment plan.  Learn more about total parenteral nutrition (TPN).

Hospitalization. Children with Crohn’s disease are sometimes sick enough to require hospitalization to correct anemia and malnutrition and to stop diarrhea, vomiting and loss of blood, fluids, and mineral salts. Patients may need a special diet, feeding through a vein, medications or, in rare cases, surgery.

Surgery. Crohn’s disease may be helped by surgery, but is not likely to be cured by surgery. Inflammation tends to return to the areas of the intestine next to the area that has been removed. Any surgical intervention in Crohn’s disease must be approached with caution. However, surgery may help relieve chronic symptoms of active disease that do not respond to medical therapy or to correct complications, such as intestinal blockage, perforation, abscess, fistula or bleeding. Types of surgery include:

The type of ostomy performed depends on how much and which part of the intestines are removed, and may include:

Learn more about surgery at CHOC.

What is the long-term outlook for a child with Crohn’s disease?

Crohn’s disease is a chronic condition that may recur or flare at various times over a lifetime. Children may experience physical, emotional, social and family problems as a result of the disease, increasing the importance of proper management and treatment of the condition at a long-term, comprehensive program like the IBD Program at CHOC.

The following chart summarizes some of the problems children may face.

At CHOC our multidisciplinary team includes a dedicated dietitian, social worker and case manager who work with families and patients to make life with Crohn’s disease more manageable. Our psychology department is readily available to help patients deal with chronic illness and develop the skills it takes to cope on their own in daily life. Our team provides easy access to all our resources including office visits, group teaching sessions and educational materials.

Ulcerative colitis is an IBD similar to Crohn’s disease. It is a chronic condition with inflammation affecting the inner lining of the large intestine (colon) and often including the rectum. Ulcerative colitis symptoms include abdominal pain and diarrhea with blood and mucous in the stool. Learn more about ulcerative colitis.