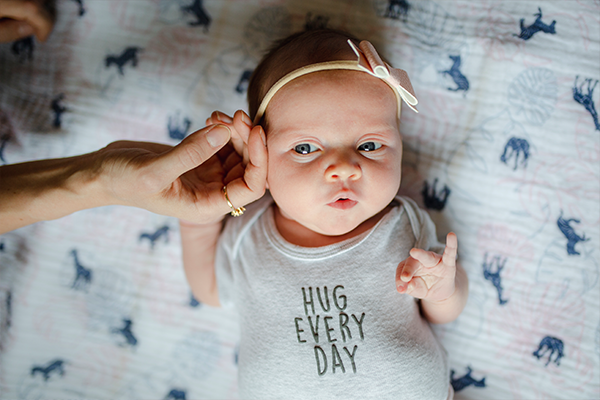 From the moment babies are born, they respond to the world around them. Their reactions — being calmed by a parent’s embrace or startled by a loud sound — are examples of normal infant development.

Doctors use milestones to tell if a baby is developing as expected. There is a wide range of what is considered normal, so some babies may gain skills earlier or later than others. Babies who were born prematurely may reach milestones later. Always talk with your doctor about your baby’s progress.

How Much Will My Newborn Grow?

In the first month of life, babies usually catch up and surpass their birthweight, then steadily continue to gain weight. A weight loss up to about 10 percent of birthweight is normal in the first two to three days after birth. However, the baby should have gained this back and be at his or her birthweight by about two weeks. While all babies may grow at a different rate, the following indicates the average for boys and girls up to 1 month of age:

Different things can affect a baby’s size at birth. The length of the pregnancy is important. Babies born around their due date or later tend to be larger than those born earlier. Other factors include:

What can my baby do at this age?

Although a newborn spends about 16 hours a day sleeping, the time a baby is awake can be busy. Much of a newborn’s movements and activity are reflexes or involuntary – the baby does not purposefully make these movements. As the nervous system begins to mature, these reflexes give way to purposeful behaviors.

Reflexes in newborns include the following:

Newborn babies not only have unique reflexes, but also have a number of physical characteristics and behaviors that include the following:

What can my baby say?

At this early age, crying is a baby’s only form of communication. At first, all of a baby’s cries sound similar, but parents soon recognize different types of cries for hunger, discomfort, frustration, fatigue and even loneliness. Sometimes, a baby’s cries can easily be answered with a feeding or a diaper change. Other times, the cause of the crying can be a mystery, and the crying stops as quickly as it begins. Regardless of the cause, responding to your baby’s cries with a comforting touch and words are essential in helping your baby learn to trust you and rely on you for love and security. You may also use warmth and rocking movements to comfort your baby.

What does my baby understand?

You may find that your baby responds in many ways, including the following:

How Long Should My Newborn Sleep?

Newborns should get 14-17 hours of sleep over a 24-hour period, says the National Sleep Foundation. Some newborns may sleep up to 18-19 hours a day. Though newborns spend most of a 24-hour period sleeping, it is best that they do not sleep for longer than 5 hours at a time in the first 5-6 weeks because they need to wake every couple hours to eat. Breastfed babies feed often, about every 2-3 hours. Bottle-fed babies tend to feed less often, about every 3-4 hours.

Expect to wake your newborn every 2-3 hours to eat until they surpass their birth weight, which usually happens within the first couple of weeks. After that, it’s okay to let your baby sleep for longer periods of time at night if they are gaining weight appropriately (about 1 pound per 2 weeks).

The first months of a baby’s life can be the hardest for parents, who might get up many times at night to tend to their baby. Each baby has a different sleep pattern. Some start to sleep “through the night” (for 5-6 hours at a time) by 2-3 months of age, but some don’t. 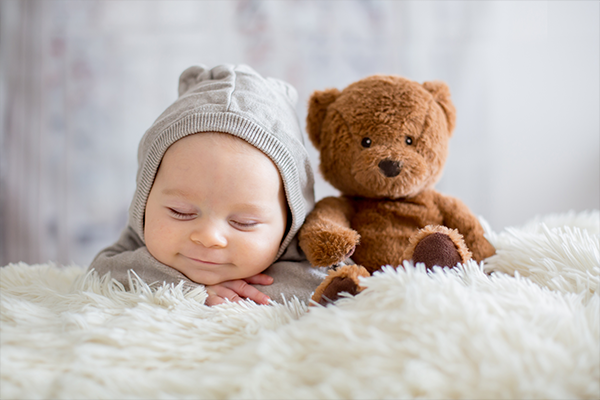 How can I help increase my baby’s development and emotional security?

Young babies need the security of a parent’s arms, and they understand the reassurance and comfort of your voice, tone and emotions. Consider the following as ways to foster the emotional security of your newborn:

Your child’s health is important at every stage. Visit CHOC Primary Care for pediatric services near you.

What's coming up for your child

Do I need a lactation consultant?

Easy Tips for Grooming Your Newborn

Choosing the Right Pediatrician for your Child

Want more parenting tips? Visit the CHOC Health Hub or sign up for our newsletter.