The most common knee ligament injuries CHOC treats occur in teens while they are participating in an intense physical activity. If your child or teen tears a ligament in their knee, movement will be severely limited, resulting in an inability to pivot, turn or twist their leg. In some cases, the torn knee ligament may need to be repaired or reconstructed.

How are knee ligaments injured?

There are four major ligaments in the knee. Knee ligaments connect the thigh bone to the shin bone and include:

How are torn knee ligaments treated?

If a knee ligament is injured, early medical treatment may include:

If a knee ligament is torn, additional treatment might include:

Can Ligaments Be Repaired?

At CHOC, we are dedicated to creating a healing environment that allows patients of all ages to feel comfortable and at ease. Our accommodations combine state-of-the-art facilities with the comforts of home to provide those staying in the hospital a healing and supportive environment. Child life specialists who are devoted to orthopaedic patients will take care of your loved one before, during and after knee ligament repair and reconstruction surgery.

What are the risks of knee reconstruction surgery?

There may be other risks depending on the child’s specific medical condition. Be sure to discuss any concerns with your child’s doctor prior to the procedure.

What is involved in knee ligament surgery?

Our orthopaedic surgeons perform knee ligament surgery on an outpatient basis, meaning there is no overnight stay in the hospital. The surgery is done under general anesthesia usually accompanied by a regional nerve blocking medication.

The surgery to correct a torn knee ligament involves replacing the ligament with a piece of healthy tendon. A tendon from the front of the knee or hamstring, for example, is grafted into place to replace the torn ligament. The tendon graft may come from the person or from an organ donor.

The surgeon will perform the surgery using an arthroscope, a small tube-shaped instrument that is inserted into the joint. Small sockets are created in the thigh bone and shin bone, and the new ligament will be passed through the sockets and attached with an implant. New bone will eventually grow around the ligament. The small incisions will be closed with stitches or surgical staples.

We understand that sending your child in for surgery to repair a knee ligament injury can be scary. However, if you follow the direction of your medical team and keep in mind the checklist below you can do your part to make the process as seamless as possible.

Formal physical therapy will be arranged, with specific therapist instructions provided at the first post-operative visit. You are to schedule an appointment with the facility to start therapy within two weeks after surgery (unless directed otherwise).

Schedule a post-operative appointment with your child’s doctor within a week following the operation (unless directed otherwise).

The bandage applied to the incisions may become moist or bloodstained; however this is normal and results from fluid placed in the joint during surgery. If the bandage becomes saturated with bright red blood, please call the office. Keep the bandages dry when bathing (“sponge bathing” is the simplest and easiest). Keep the bandages in place until you or your child are seen in the office for their first postoperative visit, where you will receive instructions regarding further bandages and wraps, as well as showering or bathing.

For the first few days after surgery, you will want to limit physical activities and rest your child’s leg. Keep their leg elevated, with a pillow under their calf, and use the cold therapy device/ice packs to minimize swelling and pain. Use the CPM (continuous motion machine) for at least 2-3 hours a session, three times daily (more if they like.) Be sure to spend at least 6 hours out of each 24-hour day with your child’s knee fully extended in the brace (this is easiest to do while sleeping). When applying the straight leg brace, be sure to have their knee as straight as possible. When standing up or walking, they should use the crutches provided and have the straight leg brace applied to their leg. With the brace supporting their knee, they may bear as much weight on their foot as tolerated (unless instructed otherwise). There may be a sensation of splashing of fluid within their joint, but this is normal and should not cause concern.

Your child will find that their knee is swollen and uncomfortable for the first few days after surgery. To reduce this, use the cold therapy device/ice packs and elevate the joint as instructed. Your child has also been provided with medication for pain relief. Use it as instructed and encourage them to take it with food to avoid stomach upset. If the medication provided is inadequate, or if they are about to run out, please call the office during daily office hours. During their post-operative recovery, please keep track of how much pain medication they have remaining to ensure that you have sufficient medication for any upcoming weekends or holidays, as prescriptions are difficult to renew on weekends. Your child may also take ibuprofen as directed, which can be obtained over the counter.

If your child develops a fever of 101 degrees or greater, if the pain they feel is much greater than expected or if they develop severe redness or swelling, please call the office. Some calf and ankle/foot swelling occurs in all cases, but it can become severe. If they develop a reaction to the pain medication provided, stop taking it and call the office. Avoid direct sunlight on the incisions until the scars are no longer red. Remember that although the external incisions are small, your child has had a major operative procedure within their knee joint. Scientific research has shown that complete healing after knee ligament surgery takes 12-24 months. A very specific and thorough rehabilitation plan has been developed to guide them in post-operative exercise and activities. They will begin this rehabilitation program after their postoperative visit. The plan may be modified, if necessary, based upon their individual rate of healing and recovery.

If your child has recently had ACL surgery, recovery exercises are an important part of their recovery, in addition to a physical therapy program. Follow our home exercise guide for 1-4 weeks after surgery. The goal of these exercises is to regain neuromuscular control of the quadricep, strengthen the hip and maintain ankle range of motion on the affected leg.

Learn how to do ACL recovery exercises at home. 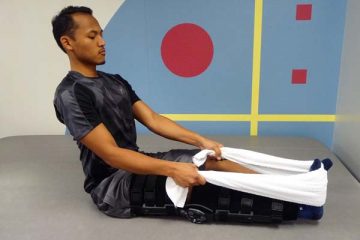