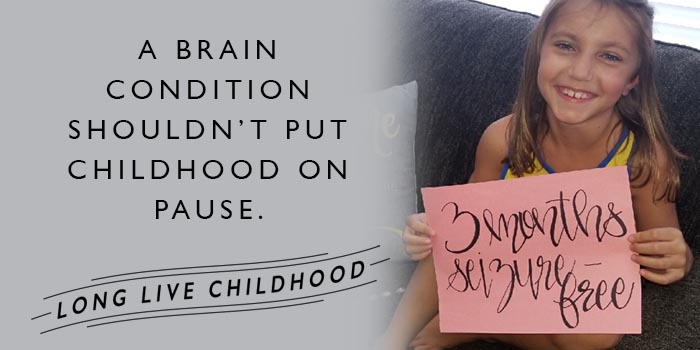 Epilepsy and Seizures in Children

Seizures and epilepsy affect children at different ages and in different ways. For some, it will be a temporary problem, easily controlled with medication and outgrown within years. For others, it may be an ongoing challenge that affects many areas of life.

With planning and preparation to help limit risks, most children with epilepsy can lead an active lifestyle.

Watch our video where Dr. Mary Zupanc talks about seizures and epilepsy in children:

There are many possible causes of epilepsy including tumors, strokes and brain damage from illness or injury. It can also be caused if the brain did not develop normally. This is called cortical dysplasia. Many times there seems to be no likely cause for epilepsy – in this case, the cause may be genetic, meaning it runs in the family. Sometimes the cause is not known.

The brain is the center that controls all responses in the body. The brain is made of nerve cells that talk with each other through electrical activity. A seizure occurs when there is abnormal activity in the brain and causes a sudden change in awareness, movement or behavior. Provoked seizures are caused by something that affects the brain for only a short time. Some examples are:

What types of seizures are there?

Simple partial seizures: During this type of seizure, your child is awake and alert and does not lose consciousness. Your child may experience an aura, or strange feeling, consisting of changes in smell, vision or hearing. Not all children experience an aura. The seizures typically last less than one minute. Your child may experience different things depending upon which area of the brain is involved Complex partial seizures: This is the most common type of partial seizure. The seizure starts in one small part of the brain and then spreads to involve more parts of the brain. Your child may be awake but not alert. This means that your child cannot answer questions or may not make sense when talking. The seizures typically last one to two minutes and are characterized by repetitive activities such as lip smacking, running, screaming, crying, laughing, swallowing or talking without making sense. After regaining consciousness, your child may complain of being tired or sleepy.

Absence seizures (formerly called petit mal seizures): These seizures are characterized by a brief altered state of consciousness and staring episodes. Typically the child’s posture is maintained during the seizure. The mouth or face may move or the eyes may blink. The seizure usually lasts no longer than 10 seconds. When the seizure is over, the child may not recall what just occurred and may go on with his or her activities, acting as though nothing happened. These seizures may occur several times a day. This type of seizure is sometimes mistaken for a learning problem, behavioral problem, or attention deficit disorder. Absence seizures typically start between ages 4 to 10 years. Atonic seizures (formerly called drop attacks): With atonic seizures, there is a sudden and brief loss of muscle tone and the child may fall from a standing position or suddenly drop his or her head. During the seizure, the child is limp and unresponsive. Generalized tonic-clonic seizures (formerly called grand mal seizures): The classic form of this kind of seizure, which may not occur in every case, is characterized by five distinct phases. The body, arms and legs will flex, extend and shake, followed by the child feeling sleepy, having problems with vision or speech, or having a headache, fatigue or body aches. Not all of these phases may be seen with every one of these seizures. Sometimes, partial complex seizures evolve to generalized tonic clonic seizures. Myoclonic seizures: This type of seizure refers to quick movements or sudden jerking of a group of muscles. These seizures can occur in isolation or in clusters, meaning that they may occur several times a day, or for several days in a row. Infantile spasms: This type of epilepsy typically occurs in infants between the ages of 4-8 months of age.  Infantile spasms often occur when the child is awakening from sleep, or when they are trying to go to sleep. The infant usually has brief movement of the neck, trunk or legs that lasts for a few seconds, occurring in clusters. Infants may have hundreds of these seizures a day. Infantile spasms are a very serious form of epilepsy and can have long-term complications. Early treatment is critical. Learn more about infantile spasms. Febrile seizures: This type of seizure is associated with fever and is not epilepsy, although a fever may trigger a seizure in a child who has epilepsy. These seizures are more commonly seen in children between 12 months and 5 years of age and there may be a family history. Febrile seizures that last less than 15 minutes are called simple, and typically do not have long-term neurological effects. Seizures lasting more than 15 minutes or focal seizures are called complex febrile seizures.  There may be long-term neurological consequences in children with complex febrile seizures. They are also at higher risk to develop epilepsy.

How is epilepsy diagnosed?

Sometimes doctors do not know why a seizure happens. There are tests that can be done to help provide more information. Diagnostic tests may include: •    EEG (electroencephalogram): This test records the brain’s continuous electrical activity by using electrodes (wires placed on your child’s head). Your doctor will order a specific EEG that will tell you more about you or your child’s seizures or condition. Learn more about having an EEG. •    Long-term video EEG monitoring: Long-term video EEG recording may be used if a diagnosis is difficult or if epilepsy surgery is being considered. Learn more about long-term video EEG monitoring. •    MRI: The MRI is a machine that uses large magnets and a special computer to take very clear pictures of your child’s brain. It can sometimes help identify the cause of the child’s epilepsy. Learn more about having an MRI. •    Blood tests: These tests check for infections or other metabolic problems. •    Lumbar puncture (spinal tap): A special needle is placed into the lower back into the spinal canal. A small amount of cerebral spinal fluid (CSF) is removed with the needle and sent for testing to look for infection or other disorders called inborn errors of metabolism. CSF is the fluid that bathes your child’s brain and spinal cord.

How is epilepsy treated?

The goal of epilepsy management is to completely control the seizures, thus allowing your child to grow and develop normally. Our main goals are to identify the type of seizure, find the right medicine for it, and use the smallest amount of medicine possible to completely control the seizures. The medications used for epilepsy are called anti‐epileptic drugs, or AEDs. AEDs are used to help the brain fight off seizure activity. Your child will start taking one AED at a time. The amount of medicine will be increased slowly until the seizures are controlled. Most of the time only one AED is needed and few side effects occur. If the amount of medicine is too high, it can cause side effects. If one AED is not enough to control the seizures, the doctor can add another AED. The first AED may be continued or may be slowly decreased and then stopped. If medications do not control a child’s seizures, epilepsy surgery should be considered. A comprehensive evaluation will help determine if surgery is appropriate for a patient – and the best surgical option for them. Learn more about epilepsy surgery. Some children with seizures may find the vagus nerve stimulator (VNS) helpful. Our epilepsy team was among the first to perform this less invasive surgical option that places a device in a patient’s chest – much like a pacemaker – that sends pulses to the brain to minimize seizures. Learn more about vagus nerve stimulation. Certain children whose seizures are not being well-controlled, may be placed on a special diet called the ketogenic diet. This type of diet is low in carbohydrates and high in protein and fat. Learn more about the ketogenic diet.

Can my child participate in sports?

When your child’s epilepsy or seizures are under good control, regular physical activity is good for your child. However, your child should avoid sports that involve climbing to a high location or contact sports that may result in head injury, until your doctor has approved of these activities. Your child may swim once the doctor determines the seizures are under control, but he or she needs to always have adult supervision. Your child should never engage in any type of water sports without adult supervision and that includes wading in a small pool. The adult should be able to swim and have the strength to carry your child if the need arises. If there is a lifeguard on duty, inform the lifeguard that your child has epilepsy.

Can my child play video games?

Can my child ride a bicycle, skateboard or roller blades?

Yes. Once your child’s epilepsy or seizures are under control, your child can ride a bike or scooter, or go rollerblading, roller skating and skateboarding. Your child should always wear a helmet prevent serious head injury.

What if my child has a seizure at school?

We know that children with epilepsy might feel anxious about going to school. Our neuropsychologists will work one-on-one with your child, communicate with their school and develop special programs to transition them back to the classroom after a diagnosis. You may also want to meet with your child’s teacher, school nurse and coach to explain your child’s condition and the steps to take if your child has a seizure while under their watch. This education may need to occur at the beginning of every school year as your child is given new teachers.

Should I discipline my child lightly so they don’t have a seizure?

My child has not had a seizure in a long time. Can we stop taking medication?

Never stop taking AED medication without talking to your doctor. More than half of children with epilepsy who have no seizures for two years can be tapered off their antiepileptic medication. If the AED is stopped and seizures start again, then medication is usually restarted. This relapse may indicate the need for long-term antiepileptic drug treatment.

Can my child’s epilepsy go into remission?

For some children, epilepsy is not permanent and with age it disappears. These children usually have at least one of the following:

My child had a fever that caused a seizure. Does she have epilepsy?

Because seizures can happen without warning, it’s best to have a plan in place so you’ll know what to do when an episode occurs. Follow our seizure preparedness plan, see our tips for traveling with a child who has seizures and learn how to take proper notes about an episode for your child’s neurologist.