What is pulmonary atresia? Pulmonary atresia (PA) is a heart defect that occurs due to abnormal development of the fetal heart during the first eight weeks of pregnancy.

With pulmonary atresia, problems with the valve prevent the leaflets from opening; therefore, blood cannot flow forward from the right ventricle to the lungs.

There may also be a second opening, or “hole,” between the two upper chambers of the heart—the left and right atria. This defect is called an atrial septal defect (ASD). These holes allow blood in the obstructed right ventricle a way out of the heart. The blood then ultimately crosses to the left side of the heart and is pumped out to the body.

This situation cannot support life, because the blood never makes it to the lungs to become oxygenated, and oxygen-poor (blue) blood cannot meet the body’s demands for normal growth and function.

Newborns will rely on a connection between the aorta and the pulmonary artery, called the ductus arteriosus. That allows some of the oxygen-poor (blue) blood to bypass the blocked right ventricle and get to the lungs. This ductus arteriosus is persistent from normal fetal circulation, and unfortunately, this ductus arteriosus normally closes within a few hours or days after birth.

Because of the low amount of oxygen provided to the body, pulmonary atresia is a heart problem that can ultimately result in cyanosis, or a blue color to the skin from lack of oxygen.

The problem occurs as the heart is forming during the first eight weeks of fetal development. Some congenital heart defects may have a genetic link, either occurring due to a defect in a gene, a chromosome abnormality, or environmental exposure, causing heart problems to occur more often in certain families. Most of the time, this heart defect occurs sporadically (by chance), with no clear reason for its development.

What are the symptoms of pulmonary atresia?

Symptoms can be noted shortly after birth or several weeks later as the ductus arteriosus closes. The most obvious symptom is blue, or cyanotic, skin in a newborn.

Although each child may experience symptoms differently, the following are the most common symptoms of pulmonary atresia:

The symptoms of pulmonary atresia may resemble other medical conditions or heart problems, so it is very important to contact the child’s physician if you suspect the child may be experiencing any of these symptoms.

How is pulmonary atresia diagnosed?

Cyanosis is a major indication that there is a problem with a newborn. The child’s physician may have also heard a heart murmur during a physical examination.

Diagnostic testing for congenital heart disease varies by the child’s age and condition. Some tests that may be recommended include the following:

How is pulmonary atresia treated?

Specific treatment for pulmonary atresia will be determined by your child’s physician. Children with pulmonary atresia will most likely be admitted to the cardiovascular intensive care unit (CVICU) or neonatal intensive care unit (NICU) once symptoms are noted. Initially, the child may be placed on oxygen, and possibly even on a ventilator, to assist his or her breathing. IV medications may be given to help the heart and lungs function more efficiently.

Other important aspects of initial treatment include the following:

These interventions will allow time for your baby to stabilize his or her blood while more definite repair is planned.

Ultimately, surgery is necessary to improve blood flow to the lungs on a permanent basis. The exact type of surgery needed depends on a number of factors, including the size of the right ventricle and whether there is a communication between the right and left ventricles (a ventricular septal defect or VSD). Your child’s cardiologist, heart surgeon and intensive care doctor will carefully review your child’s unique situation and explain their recommendations for treatment.

What is the long-term outlook after pulmonary atresia surgical repair?

The long-term outlook after pulmonary atresia repair varies from child to child. Children should receive lifelong follow-up care at a center offering pediatric (and ultimately adult) congenital cardiac care. It is not unexpected for further surgery to be performed to replace conduits or revise a palliation.

Regular follow-up care at a center offering pediatric or adult congenital cardiac care should continue throughout the individual’s lifespan.

Consult your child’s physician regarding the specific outlook for your child.

Postoperative Care for Your Child

After surgery, infants will return to the CVICU to be closely monitored during recovery.

While your child is in the CVICU, special equipment will be used to help him or her recover, and may include the following:

The child may need other equipment not mentioned here to provide support while in the CVICU, or afterwards. The hospital staff will explain all of the necessary equipment to you.

After catheterization or surgical procedure, patients are kept as comfortable as possible with several different medications; some relieve pain, and some relieve anxiety. The staff will also ask for your input on how best to soothe and comfort your child.

As your child recovers, you will be provided with instruction on how to care for the recovering child at home. Caregivers are provided written instructions regarding medications, activity limitations and follow-up appointments before the child is discharged.

Infants who have spent a lot of time on a ventilator, or who were fairly ill while in the CVICU, may have trouble feeding initially. These babies may have an oral aversion; they might equate something placed in the mouth, such as a pacifier or bottle, with a less pleasant sensation, such as being on the ventilator. Some infants are just tired, and need to build their strength up before they will be able to learn to bottle-feed. Strategies used to help infants with nutrition include the following:

Pain medications, such as acetaminophen, may be recommended to keep the child comfortable. Your child’s physician will discuss pain control before the child is discharged from the hospital.

If any special treatments are to be given at home, the nursing staff will ensure that you are able to provide them, or a home health agency may assist you.

You may receive additional instructions from your child’s physicians and the hospital staff. 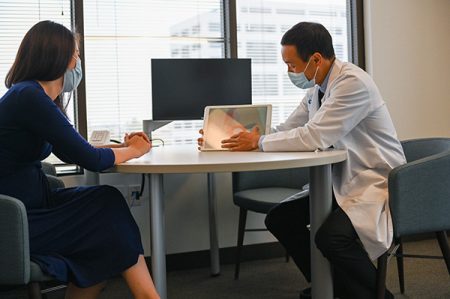 Call us for a consultation