What is patent ductus arteriosus? 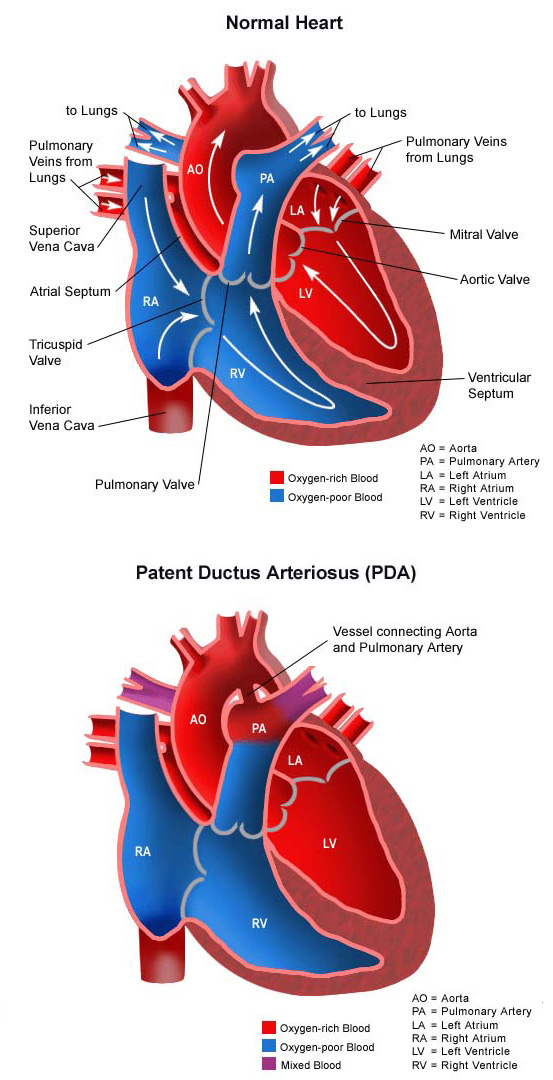 Patent ductus arteriosus (PDA) is a heart problem that is usually noted in the first few weeks or months after birth. It is characterized by the persistence of a normal fetal connection between the aorta and the pulmonary artery. All babies are born with this connection between the aorta and the pulmonary artery. While your baby was developing in the uterus, it was not necessary for large amounts of blood to circulate through the lungs because oxygen was provided through the placenta. During pregnancy, a connection was necessary to allow oxygen-rich (red) blood to bypass your baby’s lungs and proceed into the body. This normal connection that all babies have is called a ductus arteriosus.

At birth, your baby’s lungs must now provide oxygen to his or her body. As your baby takes the first breath, the blood vessels in the lungs open up, and blood begins to flow through them to pick up oxygen. At this point, the ductus arteriosus is not needed to bypass the lungs. Under normal circumstances, the ductus arteriosus closes within the first few days after birth and blood no longer passes through it.

In some babies, however, the ductus arteriosus remains open (patent) and the condition now becomes known as patent ductus arteriosus (PDA). The opening between the aorta and the pulmonary artery allows oxygen-rich (red) blood to recirculate into the lungs.

A PDA is always present at birth. In some children, the PDA does not close. Although exact reasons why this happens in some patients and not in others are not known, the most common reason for a PDA that does not close is prematurity.

PDA can also occur in combination with other heart defects.

Why is PDA a concern?

When the ductus arteriosus stays open, oxygen-rich (red) blood passes from the aorta to the pulmonary artery, mixing with the oxygen-poor (blue) blood already flowing to the lungs. The blood vessels in the lungs have to handle a larger amount of blood than normal. How well the lung vessels are able to adapt to the extra blood flow depends on how big the PDA is and how much blood is able to pass through it from the aorta.

Premature babies with a PDA may have difficulty breathing because of this extra blood flow to the lungs at high pressure. They may remain on the ventilator for a longer period of time. The support from the ventilator also may be high, due to this extra blood flow to the lungs. Older infants or children with a PDA may breathe faster than normal or tire easily, but many children do not have obvious problems.

Untreated PDA may lead to long-term lung damage; however, this is uncommon, because most children are treated for their PDA before the lungs get damaged.

What are the symptoms of PDA?

The size of the connection between the aorta and the pulmonary artery will affect the type and severity of the symptoms, as does the age at which they first occur. The larger the opening is, the greater the amount of blood that passes through and overloads the lungs.

A child with a small patent ductus arteriosus might not have any symptoms, and the child’s doctor may have only noted the defect by hearing a heart murmur. Other infants with a larger PDA may exhibit different symptoms. Although each child may experience symptoms differently, symptoms may include:

The symptoms of a PDA may resemble other medical conditions or heart problems and should be discussed with the child’s doctor.

How is PDA diagnosed?

The child’s doctor may hear a heart murmur during a physical examination, and refer the child to a pediatric cardiologist for a diagnosis. A heart murmur is a noise caused by the turbulence of blood flowing through the PDA.

At CHOC, one of our pediatric cardiologists who specializes in the diagnosis and medical management of congenital heart defects will perform a physical examination, listen to the heart and lungs, and make other observations that help in the diagnosis. The loudness and quality of the murmur (such as, harsh or blowing) as well as location within the chest where the murmur is heard best will give the cardiologist an initial idea of which heart problem the child may have. The cardiologist may recommend the following tests:

What is the treatment for PDA?

Specific treatment for PDA will be determined by the child’s doctor based on:

Although a small patent ductus arteriosus may close spontaneously as a child grows, a PDA that causes symptoms will require medical management, and possibly even surgical repair. The child’s cardiologist will check periodically to see whether the PDA is closing on its own. If a PDA does not close on its own, it will be repaired to prevent lung problems that will develop from long-time exposure to extra blood flow. Treatment may include:

Your child’s PDA may be repaired surgically in the operating room. The surgical repair, also called PDA ligation, is performed under general anesthesia. The procedure involves closing the open PDA with stitches or clips in order to prevent the surplus blood from entering your child’s lungs. Infants and children who undergo surgical PDA ligation will be cared for in the CVICU after surgery. Your child will be kept as comfortable as possible with medications which relieve pain or anxiety. The staff will also ask for your input about how best to soothe and comfort your child. You will also learn how to care for your child at home before your child is discharged. The staff will give you instructions regarding medications, activity limitations and follow-up appointments before your child is discharged. Most children will only need to stay in the hospital for a few days after the operation.

What is the long-term outlook after PDA surgical repair?

In premature infants, the outlook after PDA surgical repair depends on the following:

In children born full-term, the vast majority that had a patent ductus arteriosus diagnosed and repaired early will live healthy lives after recovering from the hospitalization. Activity levels, appetite and growth should return to normal. The child’s cardiologist may recommend antibiotics be given to prevent bacterial endocarditis for a specific time period after discharge from the hospital if a coil or occluder device was used.

In children whose PDA was diagnosed very late and/or never repaired, the outlook is uncertain. There is a risk for pulmonary hypertension (increased blood pressure in the blood vessels of the lungs).

Parents should speak with their child’s doctor regarding the specific outlook for your child.

Caring for a Child at Home Following PDA Repair

Most infants and older children feel comfortable when they go home. Pain medications, such as acetaminophen, may be recommended to keep the child comfortable. The child’s doctor will discuss pain control before the child is discharged from the hospital. The nurses in the hospital will give you directions about bathing and activity following PDA repair.

Often, infants who fed poorly prior to surgery may have more energy after the recuperation period, and begin to eat better and gain weight faster. Ask your child’s physician if you need to continue any supplements to breast milk or formula or if there is a need to watch the volume of fluids your infant should be fed.

The surgical dressing is usually a small gauze covering the site. By the time you take your child home, there may only be thin adhesive strips over the incision. You will be asked to watch for any drainage and redness around the incision site. Bathing is generally limited to sponge baths although showering may be allowed in older children. Do not soak off the strips over the incision. These will loosen in about a week and fall off on their own. If your child will be out in the sun be sure to cover the surgery site until it no longer looks pink. During a PDA surgery, the muscles of the chest wall are cut and the ribs may be spread, and the chest will be tender for a while. It is important when lifting infants and younger children to lift them by supporting their bottom and head rather than lifting by grasping their chest or arms.

Most toddlers and young children will self-limit their activity when they get tired. Older children may be given exercise limits for 4 to 6 weeks after surgery, especially activities where a fall may occur that creates a blow to the chest such as riding a bicycle, roller skating, skate boarding, swimming or contact sports.

Check with your child’s physician about giving any immunizations for the first two months after surgery.

After surgery, older children usually return to normal activity within a few weeks.