What is an atrioventricular canal defect? 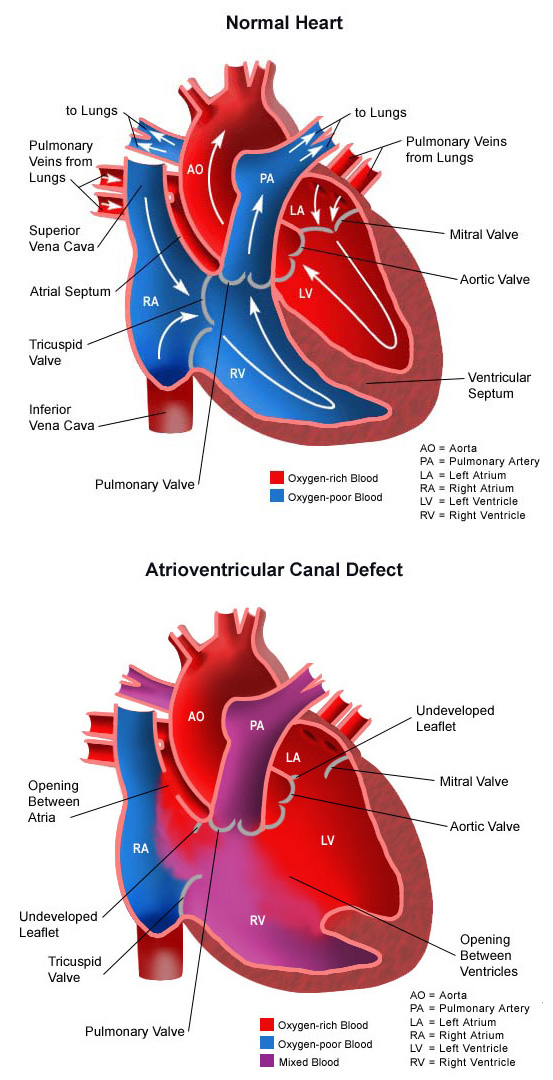 Atrioventricular canal (AV canal or AVC) defect is a congenital heart defect. That means it is present at birth. Other terms used to describe this defect are endocardial cushion defect and atrioventricular septal defect (AVSD).

As the fetus is growing, something occurs to affect heart development during the first 8 weeks of pregnancy, and certain areas of the heart do not form properly. Normally, oxygen-poor (blue) blood returns to the right atrium from the body, travels to the right ventricle, then is pumped into the lungs where it receives oxygen. Oxygen-rich (red) blood returns to the left atrium from the lungs, passes into the left ventricle, and then is pumped out to the body through the aorta. This, however, is not the case with an AV canal defect. This complex heart problem involves several abnormalities of structures inside the heart, including:

Atrioventricular canal defects occur in a small percentage of congenital heart disease cases and are more common in infants with Down syndrome.

The heart forms during the first 8 weeks of fetal development. It begins as a hollow tube, then partitions within the tube develop that eventually become the septa (or walls) dividing the right side of the heart from the left. Atrial and ventricular septal defects occur when the partitioning process does not occur completely, leaving openings in the atrial and ventricular septum. The valves that separate the upper and lower heart chambers are being formed in the latter portion of this period, and they too do not develop properly.

Genetic influences may contribute to the development of atrioventricular canal defect.

Other chromosome abnormalities (in addition to Down syndrome) are linked to this condition. Maternal age can have an effect on the prevalence of the defect.

Why is atrioventricular canal defect a concern?

As the arteries in the lungs get thicker, the flow of blood from the left side of the heart to the right side and on to the lungs will reduce. Blood flow within the heart goes from areas where the pressure is high to areas where the pressure is low. If the septal defects are not repaired, and lung disease begins to occur, pressure in the right side of the heart will eventually exceed pressure in the left. In this instance, it will be easier for oxygen-poor (blue) blood to flow from the right side of the heart, through the ASD and VSD, into the left side of the heart, and on to the body. When this happens, the body does not receive enough oxygen in the bloodstream to meet its needs, and causes a blue coloring to the skin, lips and nailbeds. This condition (called Eisenmeinger syndrome) is extremely rare because care is taken to repair AV canal defect before lung disease occurs.

Bacteria in the bloodstream can occasionally infect the abnormal valves in the heart (the abnormal mitral and tricuspid valves associated with AV canal defect), causing a serious illness known as bacterial endocarditis.

What are the symptoms of an atrioventricular canal defect?

The size of the septal openings will affect the type of symptoms noted, the severity of symptoms and the age at which they first occur. The larger the openings, the greater the amount of blood that passes through from the left side of the heart to the right and overloads the right heart and the lungs.

Symptoms frequently start in infancy. The following are the most common symptoms of AV canal defect. Each child may experience symptoms differently. Symptoms may include:

Over time, as the pressure in the lungs increases, blood within the heart will “shunt” through the septal openings from the heart to the left. This allows oxygen-poor (blue) blood to reach the body and cyanosis will be noted. Cyanosis gives a blue color to the lips, nailbeds and skin. This is very rare in the United States because care is taken to repair this type of congenital heart defect before lung disease occurs. The symptoms of AV canal defect may resemble other medical conditions or heart problems.

How is AV canal defect diagnosed?

Typically, a child’s pediatrician detects a heart murmur during a physical examination and refers the child to a pediatric cardiologist for a diagnosis. In this case, a heart murmur is a noise caused by the turbulence of blood flowing through the opening from the left side of the heart to the right. The child may have other symptoms that help with the diagnosis.

At CHOC, our pediatric cardiologists specialize in the diagnosis and medical management of congenital heart defects, as well as heart problems that may develop later in childhood. In order to diagnose the defect, the cardiologist will perform a physical examination, listen to the heart and lungs and look for other symptoms that may indicate AV canal defect. The location within the chest that the murmur is heard best, as well as the loudness and quality of the murmur (harsh, blowing, etc.) gives the cardiologist an initial idea of which heart problem the child may have. Diagnostic testing for congenital heart disease varies by the child’s age and current health conditions. Some tests that may be recommended include:

What is the treatment for atrioventricular canal defect?

Specific treatment for atrioventricular canal defect is determined by the child’s healthcare team based on:

AV canal defect is treated with surgery. Medications may be necessary until the operation is done. Treatment may include:

Medical management. Many children will need to take medications to help the heart and lungs work better due to strain from the extra blood passing through the septal defects. Medications that may be prescribed include the following:

Adequate nutrition. Infants may become tired when feeding, and may not be able to eat enough to gain weight. Options that can be used to ensure a baby will have adequate nutrition include:

Infection control. Children with certain heart defects are at risk for developing an infection of the valves of the heart known as bacterial endocarditis. It is important for parents to inform all medical personnel of their child’s atrioventricular canal defect so they may decide if antibiotics are necessary before any major procedure.

Surgical repair. The goal is to close the septal openings and repair the valves before the lungs become damaged from too much blood flow and pressure. The child’s cardiologist will recommend when the repair should be done. The operative methods used to repair AC canal have improved greatly in the past decade, and the operation has a high likelihood of success. Most children undergo surgery by the age of 6 months, and the procedure is done under general anesthesia. Children with Down syndrome may develop lung problems earlier than other children, and may need to have surgical repair at an earlier age.

What is the long-term outlook after AV canal surgical repair?

Many children who have had an AV canal defect repair will live active, healthy lives. Activity levels, appetite and growth will eventually return to normal in most children. The child’s cardiologist may recommend that antibiotics be given to prevent bacterial endocarditis for a specific time period after discharge from the hospital.

Some children will still have some degree of mitral or tricuspid valve abnormality after AV canal repair surgery. This may require another operation in the future to repair the leaky or blocked valve(s). Ongoing periodic visits with the child’s cardiologist are crucial to keeping the child as healthy as possible.

Families should consult with the child’s physician regarding their child’s specific long-term outlook.

Children spend time in the cardiovascular intensive care unit (CVICU) after an AV canal repair. During the first several hours after surgery, the patient is very drowsy from the anesthesia that was used during the operation, and from medications given to relax him or her and to help with pain. To help the child rest, these medications might be continued overnight or longer. As time goes by, the child will become more alert.

While the child is in the CVICU, special equipment is used to help him or her recover, and may include the following:

Some patients may need other equipment not mentioned while in the CVICU, or afterwards. Hospital staff will explain all of the necessary equipment as needed.

Patients are kept as comfortable as possible with several different medications—some relieve pain and relieve anxiety. Hospital staff will ask the child’s parents for their input on how to best comfort and soothe the child.

Caring for Your Child at Home Following AV Canal Repair

Most infants and older children feel comfortable when they go home. Pain medications, such as acetaminophen or ibuprofen, may be recommended to keep the child comfortable. The child’s physician will discuss pain control before leaving the hospital.

Often, infants who fed poorly prior to surgery have more energy after the recuperation period, and begin to eat better and gain weight faster. However, high-calorie formulas may be needed for several weeks or months after surgery to help the child catch up growth-wise. Tube feedings may also be helpful until the child is able to feed better.

After surgery, older children can usually handle small amounts of light activity. Right after surgery, children may become tired easily and sleep more than they did before the procedure. Within a few weeks, however, the child may be fully recovered.

Parents may receive additional instructions from the child’s physicians and the hospital staff.

Call us for a Consultation