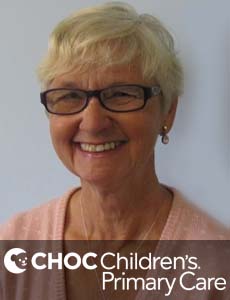 Barbara Bennett is a nurse practitioner and is a member of the CHOC Primary Care Network who treats kids and teens in Los Alamitos.

Barbara Bennett is a Pediatric Nurse Practitioner.  She was born, raised, and educated in Long Beach, CA.  She began her nursing education at LBCC, and later returned to CSULB where she completed her Bachelor’s and Master’s Degrees in Nursing.  In 1984, she became certified as a Pediatric Nurse Practitioner.  She also has her Lactation Specialist Certificate.

Barbara has worked with Drs Kaplan and Widelitz since 1975.  She began as a back-office nurse before she returned to school to get her higher degrees.

Barbara is married to her husband, David, and they have three granddaughters.  Family is very important to them, and she feels her co-workers are like family as well.