Home » News » What’s wrong with my daughter? A mom describes the misery of an elusive diagnosis

What’s wrong with my daughter? A mom describes the misery of an elusive diagnosis 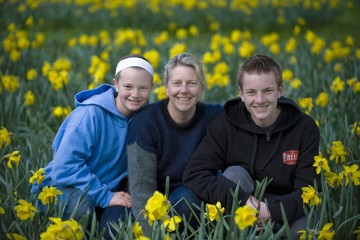 Sarah, left, with mother Karen Kelso and brother Samuel Rightmire during a happier period: a trip to London in 2012, before Sarah began showing symptoms of Ehlers-Danlos.

My favorite photo of me with my two children hangs in my kitchen. The photo, taken by my husband, Register photographer Mark Rightmire, is from our trip to Britain.

Spring daffodils are dancing around us. My daughter, Sarah, who turned 13 on our trip, looks healthy, happy and athletic.

Everyone reacts to the photo when they enter my kitchen. I always respond, “It was before Sarah got sick.”

In truth, we now know, she was sick even then.

Sarah played lacrosse and loved it, but in one extreme game she rolled her ankle. The injury dogged her. She tried physical therapy; it didn’t work. Taping didn’t help. So she had an “easy” surgery to tighten up her ankle ligament. The orthopedic surgeon said that after some physical therapy she would be back playing lacrosse in no time.

Two weeks after the surgery, my sweet daughter became an evil person I didn’t know.

Something wasn’t right. I demanded that her cast be taken off, much to the fury of the orthopedic surgeon. When it was removed, all you could see was an oozing mess; every hair follicle was infected.

This was only the beginning.

Sarah’s ankle surgery wouldn’t heal. She got an infection and walked around with crutches and a boot for almost a year. Then the headaches began and extreme nausea – symptoms that were merely breadcrumbs to the elusive medical diagnosis.

Sarah was in middle school and had always had good grades, so the principal and teachers helped her get through. All of us thinking this is just temporary and she would get better.

But this was the beginning of four hellish years, where we went from doctor to doctor looking for answers.

I tortured the pediatrician. What about this test? Did you look at this? I read anything I could online to “help” her. My son and I have immunity issues, so maybe Sarah was following in our footsteps. I watched her every move and what she ate and kept a diary.

After a severe vomiting incident, I demanded that she be tested for celiac disease. The pediatrician thought I was nuts, since she didn’t present as a typical celiac patient. It turned out I was right, but for once I didn’t want to be right. Sarah was scoped later for a definite diagnosis.

She felt vindicated, that there was really something wrong with her. We thought maybe we finally had an answer. Maybe there had always been some underlying autoimmune issue and that’s why her ankle wouldn’t heal correctly. The doctors told her to go gluten-free and she would be OK.

She did, but she wasn’t.

Sarah continued to get sicker. I was infuriated and frustrated. I couldn’t fix her. Doctors discounted her. They would make a diagnosis after talking to her for 10 minutes and then send us on our way.

She entered high school a shell of the confident, athletic girl I once knew flying down the lacrosse field. She could barely walk. She got extremely fatigued and she couldn’t keep up with her schoolwork. The doctors told Sarah she shouldn’t take honors classes, that the stress would affect her health.

Sarah was devastated. She had already lost her lacrosse friends, and now she would lose her academic ones too. It was too much.

The pediatrician pulled her from school. We did more tests.

We tried acupuncture, chiropractors, massage therapy, steroids, supplements and essential oils. Nothing seemed to help. We knew we were missing something, but financially we just couldn’t do any more.

Then the random joint pain and swelling began. Sarah was diagnosed with Raynaud’s disease, a circulation disorder that causes the fingers and feet to feel numb and cold in response to change in temperatures or stress.

Her hands and feet could go from a lovely pink to a horrific bluish-purple in minutes. She couldn’t control it and kids would stare and point at her. She would come home from school in tears.

One of her many doctors finally suggested Sarah needed to see a pain psychologist at CHOC. We felt like the crazy card had been thrown. Sarah was beyond frustrated. She felt no one believed her and that it was all in her head.

The pain psychologist, Mery M. Taylor, saw Sarah every week and began to document all her symptoms. Sarah’s ears were so cold that the biofeedback sensors wouldn’t work on the computer at times. Her hands would swell up like someone had blown up the purple medical gloves the doctors wore. A rash would creep up her legs from nowhere.

Taylor attended a conference at CHOC where a rare syndrome, the connective tissue disorder Ehlers-Danlos, was discussed. Something clicked – the over-flexibility, circulation issues, random pain, headaches and nausea all sounded like Sarah. She wanted Sarah to see Dr. Neda Zadeh, a genetics doctor at CHOC, to see if Sarah had the condition.

Online photos of people with Ehlers-Danlos showed them stretching their skin like contortionists. I dismissed the idea that Sarah had this, because the pictures were so disturbing.

People with Ehlers-Danlos have a genetic defect in their connective tissue, which provides support to many body parts such as the skin, muscles and ligaments. The fragile skin and unstable joints are the result of faulty amounts of collagen, a protein that acts as a “glue” in the body, adding strength and elasticity to connective tissue.

There are more than eight recognized types of Ehlers-Danlos. The most common seen clinically is Ehlers-Danlos syndrome Type 3 (the hypermobility type). Ehlers-Danlos conditions affect about 1 in 5,000 people worldwide.

We were reluctant, but we went to see Zadeh. She could tell we didn’t want to be there, but she told us we weren’t the first patients to feel that way. She took Sarah’s health history and did a clinical test for Ehlers-Danlos, which in part tests for hypermobility. The really cool trick of Sarah being almost able to put her forearms on the ground when asked to touch her toes was a big red flag.

As we talked to Zadeh we learned that Ehlers-Danlos is genetic – that my husband or I had passed it on unknowingly. I couldn’t fix it. It wasn’t going away … ever. It could only be managed. Zadeh told us Sarah was lucky, because the syndrome sometimes takes more than a decade to be diagnosed.

But as Sarah said, “You don’t know my mom!” I won’t let go until I have answers.

I don’t know what the future holds for Sarah. CHOC is trying to start a pain support group available for patients with Ehlers-Danlos and other conditions. Also, I recently made inquiries to see if Sarah could get into the well-known Ehlers-Danlos clinic at the Greater Baltimore Medical Center – there is a 26-month wait, but I plan to put her on the list.

How does Sarah feel about me discussing her and her diagnosis?

“If it helps another person, so a doctor doesn’t think they’re crazy, it’s worth it,” she said.

Specialists: Geneticists are generally the best doctors to see for Ehlers-Danlos, but rheumatologists and other specialists may also be experienced in treatment and diagnosis.