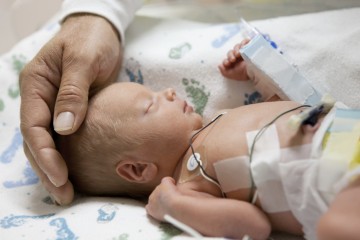 Critically ill infants are experiencing life-changing outcomes as a result of participation in a state-funded Rapid Precision Medicine program, according to a study published today in the American Journal of Human Genetics. Project Baby Bear was designed to test the clinical and economic value of rapid Whole Genome Sequencing (rWGS) to diagnose and guide treatment for infants, ages 1 and younger, with unexplained rare disease.

As one of five hospitals that participated in the program led by Rady Children’s Institute for Genomic Medicine (RCIGM), CHOC had 45 patients tested using rWGS.  Everyone has roughly 22,000 genes in their bodies that dictate things ranging from hair color to height. Although individually rare, there are more than 6,200 single-gene diseases. With just a teaspoon of blood, rWGS is the technology that allows clinicians to look at all the genes in people’s cells.

“With rWGS, we took what could have been a diagnostic odyssey for these patients and families and cut it down from weeks, months, and sometimes years to, in some cases, only three days,” says CHOC pediatric intensive care unit medical director Dr. Jason Knight. “The rapid results allowed our intensive care unit teams to change or direct care, as appropriate, which has been a true game changer.”

Project Baby Bear was funded by California as a $2 million, quality improvement Medi-Cal pilot.  In addition to CHOC and RCIGM, participants included UC San Francisco Benioff Children’s Hospital, UC Davis Children’s Hospital, Valley Children’s Hospital and Rady Children’s Hospital-San Diego.  Patients in the program were critically ill infants enrolled in Medi-Cal who were admitted to the hospitals’ intensive care units between November 2018 and May 2020. Of the 184 total patients, 40% received a diagnosis that explained their admission in a median time of three days and 32 % received changes in medical care due to their rWGS results. Additionally, approximately $2.2-$2.9 million cost savings were realized.

A lawmaker in San Diego is pushing for a new law that would expand access to rWGS testing by qualifying it as a Medi-Cal covered benefit for babies hospitalized in intensive care.

“We at CHOC are slowly building a case for early introduction of rWGS into the clinical management of difficult cases in high-acuity settings to improve lifelong clinical outcomes and quality of life,” says Brent Dethlefs, executive director of the CHOC Research Institute.

“There’s growing evidence that early introduction of this technology results in overall cost savings,” Brent adds. “It’s important to get more insurance carriers to cover the cost of this testing over time, which will make rapid whole genome sequencing more available to vulnerable and underserved populations. CHOC always has been an advocate for social justice in health care, which includes greater access to genomic testing.”