From the Orange County Register 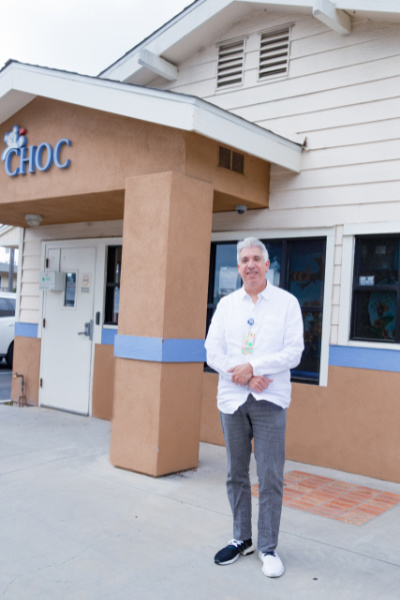 Dr. Mark Colon with his signature mismatched shoes to help break the ice with patients.

Children see it right away, which is exactly why Colon, a pediatrician, wears them.

When Colon’s patients see the mismatched shoes, they lose their fear. They’re not seeing the doctor anymore, just the guy with the funny shoes.

It’s a quirk left over from his days as a resident — a perfect icebreaker to get kids chatting.

The other thing Colon does to put them at ease? No white coat. Also, he slings his stethoscope over his his right shoulder.

If Colon’s appearance is casual, his mission is anything but.

Since it opened 21 years ago, Colon has been the lifeblood of the CHOC Clinic at the Boys & Girls Club of Santa Ana, a health care collaboration involving the child recreation nonprofit and CHOC.

Colon’s clinic was the first on-site health venue for any Boys & Girls club in the nation. Now, there’s a CHOC clinic at the Boys & Girls Club in Garden Grove, and more than a dozen others around the country.

No one has been as essential to the success of the CHOC Clinic than Colon.

Over the years, Colon has treated more than 100,000 children, from infancy to age 18, all at the Santa Ana location. In the organization’s ribbon cutting photo from 2000 — a picture that featured the kind of over-sized scissors favored by developers and city planners — Colon’s hair is dark with a few few streaks of gray. Today, it’s a solid, silvery white.

But the warm heart hasn’t changed a bit.

Last year, for its 20th anniversary, the Boys & Girls Clubs of Central Orange Coast, an umbrella group with sites in five cities that include Santa Ana, wanted to honor Colon’s career by giving him its DreamMaker Award. But COVID-19 prevented the annual “Be Great” gala from taking place. Colon was given his award this October.

Colon, 58, was honored for his more than two decades of work at the clinic and for creating aCOVID-theCOVID-19 health-and-safety protocol that has become a blueprint for Boys & Girls Clubs around the country. (His ideas on that front also helped the clubs re-open after a few weeks of shutdown in early early 2020, so they could provide day care for the children of healthcare and essential workers, remote learning assistance, and other vital community services.)

But Colon deflects the praise. He says the clinic’s success comes from being embraced by the community. community. “Otherwise, we wouldn’t be here.”

He has embraced them back.

If Colon is just the right guy to earn the trust of parents who bring their children to the clinic for financially subsidized health care — and he is — it’s because he understands their lives. His father was was a poor immigrant from Zacatecas, Mexico, one of 12 children.

Colon is both a role model for the children he treats, and a comforting figure to their families, said Robert Santana, chief executive officer for Boys & Girls Clubs of Central Orange Coast.

“Imagine being a young kid going to the doctor and meeting someone that looks like you, a Hispanic that came from a community like yours,” Santana said before he presented the DreamMaker Award to Colon. “Someone that you can touch and learn about, and how that has  potential impact on your life as someone that might be growing up in poverty.”

Colon  was working the job even before the clinic opened, when he was seeing patients in an office in a motor home parked across Highland Street at Pio Pico Elementary School in Santa Ana. Eventually, the permanent clinic was built next door to the Boys & Girls clubhouse, occupying a corner at the front of the parking lot. Today, it’s a no-frills, single-story building, with four exam rooms rooms down a narrow hallway.

That clinic sees about 70 patients a week, including kids who come to the club and any child from the neighborhood and surrounding community, a dense mix of older homes and crowded apartment apartment complexes. When parents bring their children in for help, they invariably come on foot.

Most of Colon’s patients are Spanish-speaking and poor. If they lack health insurance, they don’t get turned away — CHOC will cover the cost of that care and the staff will assist the family in applying for for Medi-Cal.

Given the reason behind the establishment of the clinic, that open-door policy is crucial.

Felipe was a kid in the neighborhood, and a member of the Boys & Girls Club. His parents didn’t have health insurance or the money to take him to a doctor. But he got sick and, soon, his condition worsened. In an ambulance on the way to the hospital, he died from meningitis.

A board member of the Boys & Girls Club paid for Felipe’s funeral, and the boy’s passing became a milestone of sorts. The club soon approached CHOC about starting a clinic to prevent any more deaths like Felipe’s. Colon remembers treating Felipe’s brother as a patient at the clinic and sensing their their mother’s feeling of relief. 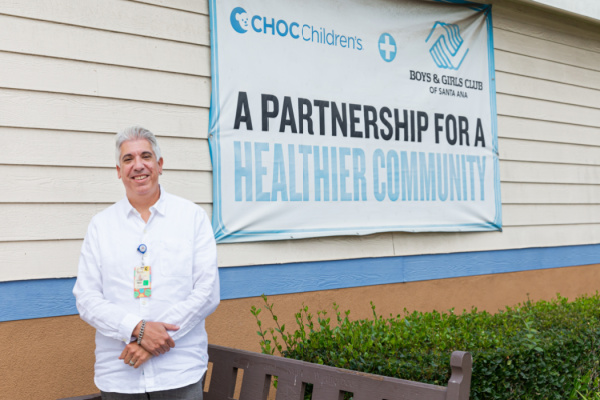 Colon, who has an older brother, was born in Los Angeles County and grew up in Brea.

His mother, Bette, was German and Irish. She met his father, Tomás, a World War II veteran, while dancing to big band music. Both parents came from humble beginnings and sacrificed to send Colon to a Catholic grade school. He graduated from Brea Olinda High.

From a young age, the only thing Colon ever wanted to be was a doctor; he got his training at UCI School School of Medicine.

His dad held various jobs, including procuring parts for Hughes Aircraft. His mom loved having kids around around the house, including Colon’s cousins and his friends. Some of those friends were, like Colon, children of immigrants, from places as diverse as Iran and Korea.

“My father worked harder than I have in my whole life,” said Colon, who fondly remembers precious Saturday downtime, watching boxing on TV with his father. “It was not uncommon for him to to work 12 hour days. But he never complained.”

His parents were around for the opening of the clinic, but both have since passed away. He’s married with two children of his own, ages 15 and 19.

Colon sees the same work ethic and graciousness that marked his upbringing in the parents of the children who come to the clinic. They sometimes say thanks by bringing homemade food to Colon and the four other staff members — two nurses, a clinical assistant and a receptionist — who keep the the clinic humming.

“I love coming first thing in the morning to the clinic because you can smell the food people are cooking at home,” Colon said. “Chorizo in the morning, tortillas being made. It’s wonderful.”

As a pediatrician, Colon has plenty of opportunity to encourage the children he sees to realize their own own dreams.

“When I’m looking in their ears, I ask how school is going and what they think they want to do after high high school … Not what somebody else thinks they should be.”

He tells them in Spanish, “Tu quieres, tu puedes.” If you want it, you can do it.

Ruby Colon Ruby Mendez, a nurse in the clinic, attests to the ease with which Colon relates relates to his young patients, their parents and, really, anyone he encounters.

“He’s amazing,” said Mendez, who began working at the clinic three years ago. “He’s the person you can can go and talk to about anything and everything. Families open up to him.”