The Long Road to Hope 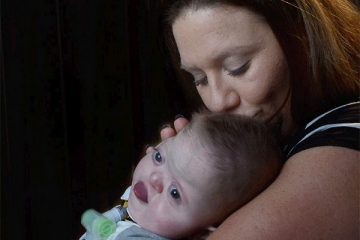 Karen Stapleton nuzzles her 1-year-old son Noah in their home. Noah was born with multiple disorders, including one that caused his skull to fuse prematurely. (Photo: Bill Alkofer, OC Register Staff Photographer)

Before Noah Stapleton’s first birthday three weeks ago, he had been through four major surgeries. With a fifth coming up and Southern California’s blood supply dipping to dangerous levels, he’s going to need a little help from donors to recover from his next surgery.

Noah was born to Karen and Harley Stapleton of Orange, with a heart condition requiring multiple open-heart surgeries, Down syndrome and apert syndrome, a condition that prematurely fused the bones of his skull and fused his fingers and toes.

Seeing their son live to his first birthday wasn’t just a miracle, his parents said, it was a chain of miracles.

Things were touch-and-go with Noah from the moment he was born. His mother had only fleeting moments to glimpse her baby boy before we was rushed away to emergency care.

It was a month before he was able to go home, when things seemed to be normal at last. He was back in the hospital a few weeks later. Doctors had to insert a breathing tube but faced complications. His heart stopped and he had to be revived- his first open heart surgery followed.

Noah’s mother fought back tears as she recalled all her son has been through, including being sedated for 19 consecutive days before she made the call to approve a tracheotomy.

Stapleton wrestled with the decision to approve the procedure, she said, but having her baby boy awake, active, and home gave her a long-awaited sense of hope.

“These conversations happened, but there’s no other option that to just keep at it,” she said. “Now he’s here and he’s doing good.”

Set for Aug. 25, Noah’s next surgery will be to restructure is face and skull, to avoid brain damage as he continues to grow- a surgery that requires more than usual blood supplies be on hand. Further down the road, he’ll need additional surgeries to separate his hands and feet into individual fingers and toes and, when he’s a few years old, to bring his face outward.

Noah’s mother and grandmother will be donating blood to help him recover from his surgery this month, but it may not be enough. The American Red Cross, for the first time in eight years, issued an emergency call for blood and platelets last month, its supplies dangerously low.

The family is hoping to drum up additional donations for Noah and the others in need at Children’s Hospital of Orange County.

As the next surgery draws closer, Noah’s parents said they are just happy to finally have sight of a normal life for their boy. His mother said she’s learned from Noah patience and to put things in perspective- being stuck in traffic or catching a cold doesn’t seem so bad after watching her son fight for his life day after day.

“With how much he’s fought, he just smiles, he’s not cranky and he doesn’t cry,” Stapleton said. “He’s enjoying every single day he gets to be here. That’s the life he’s taught me to live.”