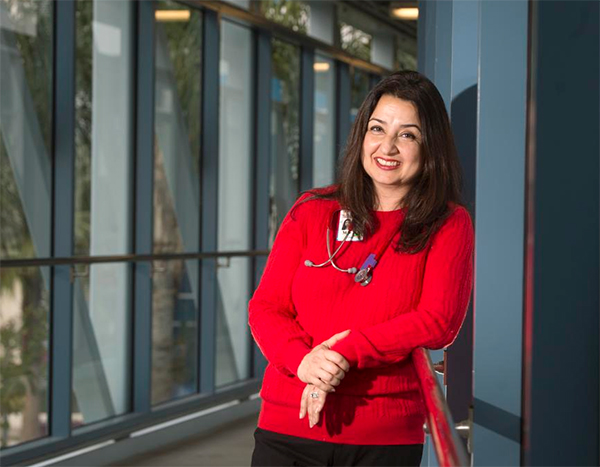 Dr. Negar Ashouri, is a pediatric infectious disease specialist at CHOC Hospital, who has been credited with determining that an outbreak of pediatric dental infections was under way. (Photo by Jeff Gritchen, Orange County Register/SCNG)

Dr. Negar Ashouri, a pediatric infectious disease specialist, was on call one weekend over the summer when she saw a patient with a severe oral infection unlike anything she’d ever treated.

About a month later, on call again at Children’s Hospital of Orange County, a second child came in with strikingly similar symptoms.

Each time, Ashouri worked to make a diagnosis by performing an exam and ordering tests.

Then, she carried out a piece of detective work that cracked what would turn out to be the biggest infection case of her career.

“At that point I was kind of scratching my head because this is almost a carbon copy of the other one and it’s just so bizarre. Two kids having a very similar infection after dental work,” Ashouri said. “Was it done at the same place? Do we have a bigger problem?”

Ashouri confirmed that both patients underwent pulpotomies, informally known as “baby tooth root canals,” at Children’s Dental Group in Anaheim. The county’s Health Care Agency was notified in early September and within 24 hours, public health officials launched an investigation and told the clinic to stop performing the procedure.

The clinic was ordered to replace its water system Sept. 15 after water samples tested positive for mycobacterium. But the outbreak was only beginning.

To date, 89 children have been evaluated at CHOC for potential infection. Sixty patients, ages 2 to 10, have confirmed or probable mycobacterial infections, according to the Health Care Agency. Among CHOC’s patients, 26 were discharged with intravenous antibiotics that they will need for up to five months.

After the clinic re-opened in November, county testing found more of the germ and ordered Children’s Dental Group to close again last week.

“The natural question is how many more cases would have happened if Dr. Ashouri hadn’t recognized this connection?” said Dr. Matt Zahn, medical director of epidemiology for the county’s Health Care Agency. “I don’t know the answer to that. I’m grateful we don’t have to find out.”

Zahn said rather than waiting two to four weeks for lab testing to confirm a common mycobacterial infection, fewer children were potentially exposed and many others received treatment more quickly once the outbreak was discovered.

“One of the hard parts about this illness is that it is not easily diagnosable,” Zahn said. “The more quickly you are treated for this infection, the better your outcome.”

On call
Ashouri, 43, was on call in August when the first patient came to the emergency room with a swollen jaw and lymph nodes. She tested the girl’s immune system, figuring it must be compromised for her to have such a severe infection. But those tests came back normal.

About a month later, the second girl came in during Ashouri’s weekend shift. When she learned this child had also undergone a pulpotomy, she checked back with the first patient – now discharged – to find out where she’d been treated.

When Ashouri learned both children had gone to Children’s Dental Group in Anaheim, she alerted Dr. Antonio Arrieta, director of infectious disease at CHOC. She also spoke to Zahn.

Only children who underwent pulpotomies, which are used to treat a deep cavity, have become ill. The procedure, intended to save the baby tooth, involves removing infected pulp before the tooth is covered with a stainless steel crown.

“It was sort of the perfect storm,” Ashouri said. “They’re doing a very deep tissue procedure and then if it’s being injected with water that’s contaminated and a cap is placed on, it’s the perfect environment for a germ to grow and set up infection. It had nowhere to go but down.”

Onslaught of cases
As word spread – with Children’s Dental Group contacting parents to bring pulpotomy patients back for an evaluation, and television news trucks broadcasting from in front of the Lincoln Avenue clinic – CHOC was flooded with patients.

“We were all of a sudden faced with a pretty bad situation and some very sick kids,” Ashouri said.

They all required extensive work-ups and treatment: CT scans of the face, neck and chest; blood tests; and surgery for tooth extractions or removal of infected tissue and bone. Ashouri and her four fellow infectious disease physicians put in long hours and came in on their days off. She would work on patient notes at home in the evening, sometimes until midnight.

The doctors sought guidance from mycobacterial experts across the U.S., including doctors who treated a similar outbreak last year in Georgia. Because the bacteria is so resistant, the CHOC team received approval from the Food and Drug Administration to treat some of the children with a tightly regulated intravenous antibiotic also used for leprosy.

Supporting families
Ashouri stayed in close communication with parents, offering compassion even as she sometimes struggled to remain composed.

Zack Morales’ 7-year-old daughter Mimi had a July pulpotomy and underwent surgery in September to remove part of her jaw bone and three infected permanent teeth that had yet to grow in. The second-grader has a port to receive the leprosy medication.

Morales said Ashouri has always been kind and patient when caring for Mimi.

Arrieta, who met Ashouri during her third year of medical school, encouraged her to pursue infectious disease, which can involve treating anything from severe flu cases to congenital infections.

“She displayed a great deal of what we call scientific curiosity and the willingness to sit down and do the work to try to find the answer,” Arrieta said. “Oftentimes, the answers are not in textbooks.”

Ashouri said she’s coped with the dental infection outbreak by letting go of her day to spend time with her husband and their 3-year-old son.

“It’s hard to do that when you look at your own son and you realize there’s kids his age at home with IV antibiotics and having multiple surgeries,” she said. “It’s very hard to separate it.”

But she said she’s continually inspired by the resiliency of her young patients, who laugh and play as soon as they start to feel better.

“It reaffirms the reason why we all went into medicine,” Ashouri said. “It all comes down to the kids.”