From the San Gabriel Valley Tribune 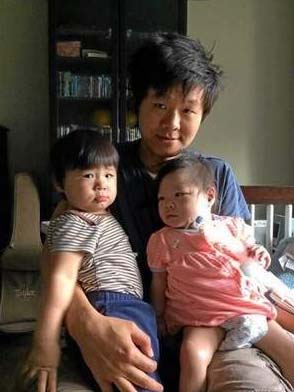 Parents will do anything for their children. But sometimes, they face staggering odds when a child becomes sick with cancer or another disease.

Caris and Brian Chan of Diamond Bar tried to have children for 10 years. Finally, they got the wonderful news that they were expecting after a successful in vitro fertilization.

“Then the doctors noted another mass growing and discovered we were having twins,” Brian Chan recalled. “But the second baby always seemed a week behind in its development.”

Finally, the twins were born premature, a boy, Ezra, weighing 3 pounds while his sister, Galya, weighed only 2 pounds. Ezra grew hale and hearty, while Galya began ill with a unknown illness.

“She kept getting worse and worse, her liver became so enlarged that it looked like she was pregnant,” the software engineer remembered. “And Gayla was yellow from severe jaundice.”

Thus began a medical mystery that took months of intensive care. Galya was taken to the UCLA Medical Center, where doctors performed a liver biopsy and began genetic testing.

“I remember riding with her in three ambulances over one 24-hour period,” Chan said.

Then, the 2-year-old was admitted to Children’s Hospital of Orange County. Genetic tests revealed a devastating rare condition called Niemann Pick C. The couple also learned there was no treatment for the disease.

“The diagnosis is horrible, but it’s better to know than to not know,” Chan said.

Dr. Raymond Wang, a metabolic disorders specialist at the children’s hospital, says the condition affects one in every 150,000 people. The disease causes cholesterol to build up in the brain, lungs, liver and spleen. This causes organs to deteriorate, leading to an early death.

“The condition also slowly kills the brain cells, which is why they call it Childhood Alzheimers,” Chan said. “They said our daughter’s mental condition would continue to deteriorate.”

Fortunately, Dr. Wang had heard of some researchers studying the effects of cyclodextrin, a simple sugar, on animals with Niemann Pick C. The compound reduced cholesterol levels in the test animals, allowing them to live longer.

“I did some research online and discovered a couple in Arizona who were giving cyclodextrin to their twin daughters, who also have the condition,” Chan said. “Chris and Hugh Hempel said their daughters were improving.”

“The problem is there’s no company that’s willing to get behind the treatment for humans,” Dr. Wang explained. “There aren’t enough patients with this condition for companies to see the potential and profit for this. It comes down to individual physicians who want to make a difference.”

With the Chan’s approval, Dr. Wang began the lengthy process to get special permission from the Federal Drug Administration to treat Gayla with cyclodextrin. Four months later, she became the youngest of only 11 patients in the country treated with the compound.

The Diamond Bar toddler gets weekly intravenous infusions of cyclodextrin. She also receives monthly intrathecal infusions, with the compound injected into her central nervous system through a lumbar puncture.

The youngster is admitted to the pediatric intensive care unit to get the six-hour long infusion. Gayla stays 15 more hours for observation.

“When Gayla began the treatment nine months ago, her cholestrol was six times higher than normal. Now her levels have dropped more than 80 percent, registering just above normal,” Chan reported.

In fact, the results have been so promising, that Dr. Wang wants to increase her intrathecal infusions to every other week. He will also see if the treatments are healing her lungs.

“Once we found out the diagnosis, it was sad,” Chan said. “But now we can put our energy into helping Galya and finding a cure.”