Her husband Jeff would want her to go on.

That much Jena Jensen knew. Go on even when “you don’t feel like yourself, when everything makes you cry,” she says. “Oh, we could talk for days and days about all the waves of misery that hit you.”

In 2020, when hundreds of thousands were dying, in a year when millions were suffering alone, Jensen, chief government relations officer for CHOC Children’s, was at the forefront of coordinating the hospital’s efforts to keep children safe during the pandemic. She was also gearing up to take the reins as chair of the Orange County Business Council in 2021 – in the wake of what analysts say has been the worst economic downturn since the Great Depression.

Even before what happened, happened, there in the Jensen home that December morning – just a week before Christmas – the CEO of the business council, Lucy Dunn, had worried that, given the daily pressures of Jensen’s job during the battle with COVID, she might want to wait a year or so before assuming the demanding and very public job of board chair.

“But no. Not Jena,” says Dunn. “She was looking forward to the role; she knew we had to manage her time as a volunteer/servant leader at OCBC with her duties at CHOC, and even when offered a pass, she said, ‘I want the job.’ God love her.”

Jensen had helped shape the OCBC strategy of “Good business is also good health” in 2020, which called on local businesses to mask up and implement other protocols to protect employees and customers, as well as efforts to connect struggling businesses with resources. And, in fact, Dunn had suggested that OCBC continue the “good health” theme into 2021 to “inspire our work plan.” But Jensen thought that people were hungry for a sense of hope and wanted to get on with their lives. Dunn says it was Jensen who suggested the theme instead be “Resilient OC.”

“And Jena,” she says, “is the human embodiment of this theme.” 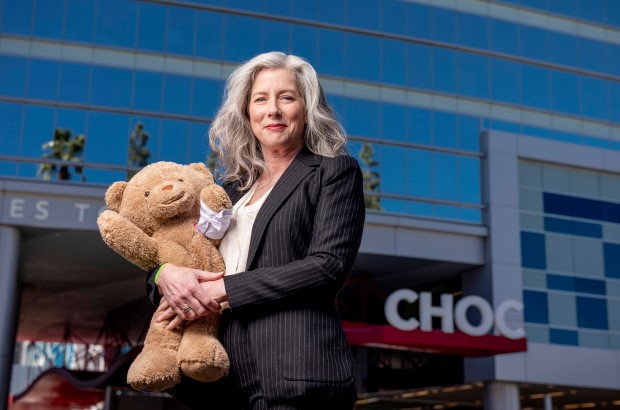 If Jensen’s life with her husband Jeff were a movie, it would begin with a scene where our heroine, in her first week of college at UC Berkeley, goes to a sorority get-together at a pizza joint. A handsome, second-year law student stands at the bar buying a pitcher for his softball team, a beer break between playing a doubleheader. (“I’m sure the second game just went marvelously well,” she says wryly.)

“I mean he was really handsome, objectively handsome,” she recalls, “but he wasn’t my type.”

Meanwhile – this was Jeff’s favorite story to tell, she says – that handsome man had done his own noticing of a certain beautiful coed. He went back to his teammates and told a friend, “Do you see that girl over there? She’s going to be my next girlfriend.”

“How are you planning to accomplish this?” said the friend.

Cut to 34 years later in Tustin, where the couple has raised three now-grown children, Maxwell, Kathleen and Erin. Jeff has an established real estate law practice, and Jensen has spent 29 years working up the ranks at CHOC Children’s while actively serving the OC community on a number of high-profile boards, like the Santa Ana Chamber of Commerce, Orange County Forum and the Santa Ana College Foundation, and an advisory committee for CalOptima.

The path of true love that had begun in the pizza parlor hadn’t always been easy. “I put a photo of us on Instagram and I had said to my daughter that day, ‘Oh, you know what? Tomorrow is Dad’s and my 34th wedding anniversary!’ Kathleen said, ‘Well congratulations on fighting for 34 years.’ I thought it was so funny. We did fight for 34 years. We also fought for our marriage for 34 years. Somebody asked me one time, what’s the secret of longevity in a marriage? And I said, don’t get a divorce,” she says with a laugh.

The last two years of their marriage had been sweetest of all, she says. They were proud of the kids – who they’d put through college without borrowing a dime – and they were content with their careers, and in love with each other. “We had a lot more time together and a lot of less stress than we’d had in our early days. And I was really counting on more of that.”

A natural introvert, Jeff had no problem with quarantine, fulfilled sharing time with her and their two daughters, who returned home at the start of the pandemic. “He was the happiest he had probably ever been, you know, to get to spend all that time with the girls and be in his house.”

But a shadow had always been following them through the decades. And just when they were rounding the corner on the awful year 2020, it finally caught up to them.

“When we got married, he told me, ‘I have to warn you. I’m going to die young, probably of a heart attack,’” says Jensen, her voice cracking ever so slightly as she recounts his family history of relatives who died from “widowmakers,” massive heart attacks that claimed grandparents, and then, eventually, his own brother. “Jeff just … he talked about it a lot, the fact that death is something that we’re on a first-name basis with in our family. And I remembered saying to him – kind of jokingly, because of course I didn’t take him seriously then – well, what should I do with you?”

And then, on Dec. 16, right in their bedroom, the widowmaker came for Jeff. Sudden, massive and out of the blue.

She tried CPR. She tried, well, everything she could.

But Jeffrey V. Jensen passed before her eyes. Dead at age 61.

“The really tough pill to swallow was that he had a comprehensive check-up with labs and subsequent cardiology workup in October, and everything came back normal,” she adds. “We never know what’s around the corner.”

No one would have batted an eye if Jensen had stepped from everything after this traumatic loss. Instead, she leaned into that idea of resilience she’d pitched as OCBC’s theme for 2021.

But it was more than that. “My parents raised me to follow through on a commitment. If you’re Gen X, we weren’t given a lot of grace growing up. If you were sick, if you didn’t feel good, if you were sad, it doesn’t matter. You keep going. I feel like that was the culture of our childhood. I still am not a person who feels comfortable backing down from a commitment, so that was part of it,” she says. “And Jeff wanted me to do it, he was really proud of me being, you know, the incoming chair of the board for this organization.”

Jensen also knows she is not alone in her grief. “I often think about how many widows across the United States are going through this right now, because of the half a million dead from COVID. And I promise you, there are people who died from heart attacks that were months after they recovered from COVID that they might not have had if they hadn’t had COVID.

“So there’s a lot of death and suffering that people are processing.”

But what fortified her most was something that Jeff had written years earlier, remarks he had given on the occasion of his brother Brian’s funeral, who had also died of a sudden heart attack.

“He told me before he gave the remarks, he said, ‘I want you to know when I say this, I’m saying this to you and our children.’”

After he died, she found the copy she’d kept in her office. It read:

“My dear beautiful wife and my precious children. I’m so proud of you. I regret that I will not be there to help you through the trials of life anymore. And that you’ll miss sharing your triumphs with me, but those are my only regrets. And I want you to get past any grief for me as soon and as best you can.

“Don’t let memories of me cause you sadness. Remember instead of the happiness we shared, my life was so full. I did so much, had so much fun, saw so many places and things and knew so many great people and loved so much of it. And so many of them, but know, and remember always of all the wonders that filled my life, I loved you more.”

She wipes a tear and then looks up.

“You can either ignore what your husband says to you from the grave, or you can listen to it. And so, knowing that this is how he felt, 100 percent, he would want to see me keep growing and keep learning and keep giving back while I can. So when Lucy calls me and says, ‘Jen, are you sure you want to take this on?’ The answer is yes, absolutely. Absolutely.”