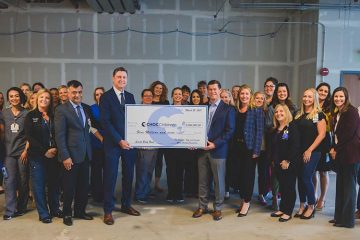 Jeff and Jenny Gross present members of the CHOC Foundation and CHOC’s neonatal intensive care unit with a $5 million donation.

CHOC Children’s today announced a $5 million gift from the William, Jeff and Jennifer Gross Family Foundation to expand its Small Baby Unit (SBU) on its main hospital campus. Opened in 2010, the SBU focuses on caring for the unique needs of the smallest and sickest babies.  Designed for infants born at less than 28 weeks gestation or weighing less than 1,000 grams, it is the only unit of its kind anywhere.

The donation from the foundation founded by asset manager Bill Gross, his son and daughter will support building out shelled space on the fourth floor of the hospital’s Bill Holmes Tower.  CHOC is in the early planning stages of the expansion which will include between 20-24 beds in an environment of private rooms.  No additional details are currently available.

“We’re thrilled to support CHOC Children’s and their efforts to improve care for the tiniest, most fragile newborns in our region through the expansion of their Small Baby Unit.  CHOC changes many lives every day and is truly a world class children’s hospital.  We’re honored to be a part of it,” says Jeff Gross.

Located in CHOC’s North Tower, CHOC’s current SBU features two four-bed pods and four individual rooms­­, of which two are fully functional operating suites. Different from a traditional NICU, this smaller unit allows for a darker, quieter environment that encourages developmentally supportive care. The goal is to create an environment that respects and supports the physiologic needs of the baby to grow and develop after being born so prematurely. Grouping this population also provides parents an opportunity to form strong bonds with other families sharing similar experiences.

Outcomes from the two years before and four years after the SBU’s opening in 2010 include:

Additionally, there was a reduction in illness and complications among infants after leaving the SBU.

“We are proud of the outcomes we’ve seen in the 400 babies who have ‘graduated’ from our Small Baby Unit and want to continue to enhance the care we deliver to these patients and their families.  We are grateful for the William, Jeff and Jennifer Gross Family Foundation’s generous support, which will allow us to serve even more very low birth weight babies in the future,” says Dr. Vijay Dhar, medical director, neonatal intensive care unit, CHOC Children’s.

Yet another study finds vaccine are safe

Jack & Jill Guild’s “Tee it Up for CHOC”

Ace Hardware Round Up Campaign

Panda Express Register Round Up

Navigating summertime while living with IBD

How donating plasma after COVID-19 can help others

How COVID-19 survivors can support others through plasma donation