Home » News » Can artificial intelligence turn your doctor’s attention back to you?

Can artificial intelligence turn your doctor’s attention back to you?

June 17 – The electronic health record is often criticized for stealing time and eye contact away from patients during doctors’ visits. 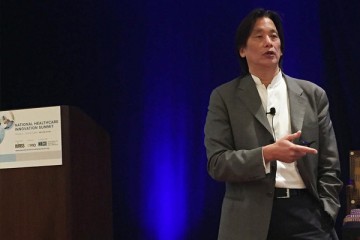 Anthony Chang, a pediatric cardiologist, spoke on the topic Wednesday at a keynote titled, “Dr. AI will see you now: the new era of artificial intelligence in healthcare” at the National Healthcare Innovation Summit.

Chang is chief intelligence and innovation officer at the Children’s Hospital of Orange County in Orange, Calif. The three-day summit at the Intercontinental Chicago ends Wednesday.

The “public perception of doctor AI is, we’re going to have robotic doctors walking around and taking care of you,” Chang said. Instead, it would be more like an invisible third party in the room that could mine and crunch data to help doctors identify treatment options.

“My own doctor most of the time is tapping away on his computer, and not really looking at me anymore. We need to get back” to that time where doctors engaged with their patients, he said.

Chang said researchers are looking at the brain’s different functions when working on ways AI can work in the context of healthcare — including image recognition, machine learning, natural language processing and a decision support system.

“The way we’re going to look at the brain is four main functions that a typical physician will have to perform very well during a typical day in the hospital and in a clinic setting,” he said. “The way I like to describe this is, let’s take a brain and what the brain does and think about how we can do the same thing that the brain does with machine intelligence.”

“You hear about all of these ‘as a service’ entities in computer software and cloud platforms, but what if we eventually have ‘intelligence-as-a-service?’” he said. “Why can’t intelligence just be available to whoever and wherever? There are doctors all over the world who don’t have the expertise that we have here in the States or in Europe.”

And this is not a far-off concept, Chang said.

“This is actually something that we’re going to put into work at our hospital: take cardiology patients, build data and try to generate intelligence from the data with all of our partners,” he said.

Though we might imagine medical technology of the future looking something like the The Jetsons’ robot maid Rosie with a stethoscope, that might not be the case.

“With very intelligent use of artificial intelligence in medicine, it should be not visible, it should be omnipresent, and give us the ability to be back in touch with our patients again,” he said.

“I actually don’t have computers in my clinic’s exam rooms because I think it’s very distracting. It should be a sanctuary, it should be for humans only, and the only we can do that is [by] incorporating AI in a very creative and innovative way.”