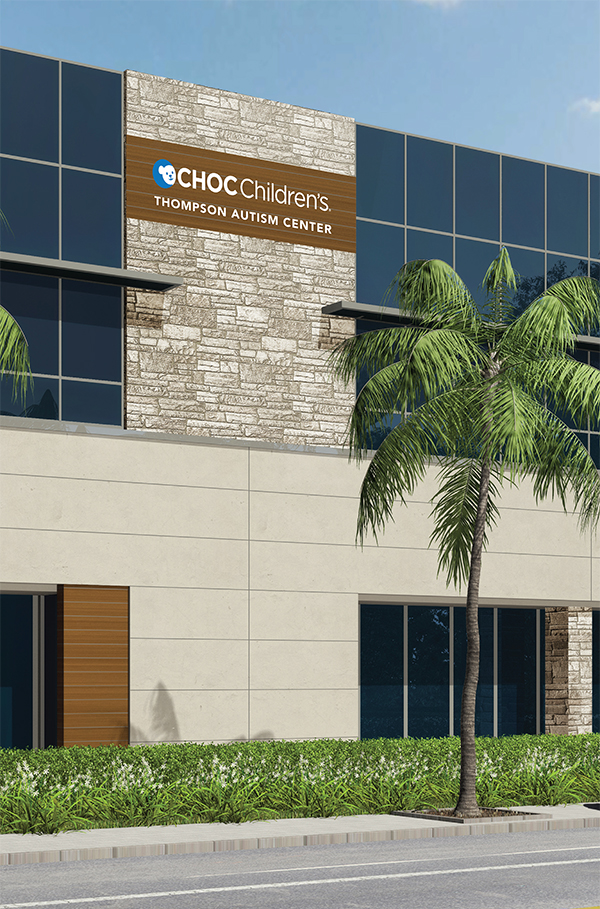 Bill Thompson is a man of action. Once he sets his sights on something important, he gets things done. Case in point: helping children with autism spectrum disorders (ASD) and their families.

“Years ago, when I began looking at philanthropy and how I wanted to give back, my first priority was healthcare— hospitals and children,” Bill says. “When I became aware of the need for more services for children and families with ASD, I knew this was where I wanted to invest both my time and funds.”

Bill first learned about ASD in 2005 from his daughter, Emily, who had received her master’s degree in Special Education from Chapman University and had been practicing as a behavioral therapist with children. She would describe the challenges these children faced, and the lack of resources at the time to manage their condition.

The need for action was reinforced, when, as CEO of PIMCO (Pacific Investment Management Company) in Newport Beach, Bill heard from several employees with children diagnosed on the autism spectrum who had difficulty finding specialized healthcare services in the community.

“This led me to do a lot more reading,” Bill recalls. “I learned there were doctors and researchers at my undergraduate alma mater, the University of Missouri, expert in the condition, and I decided to create a comprehensive center for autism.”

In 2005, he donated $8.5 million to start and fund the Thompson Center for Autism and Neurodevelopmental Disorders at the University of Missouri. This extremely successful program, which has gained national recog- nition, provides clinical services to patients and families, conducts groundbreaking research, and educates and trains healthcare professionals in the field.

Bill is now focusing this same passion in Orange County, unveiling a new collaboration with CHOC Children’s to expand the region’s capacity to serve children with ASD and their families. With a $10 million founding gift from the William and Nancy Thompson Family Foundation, Bill seeks to make a profound impact through this innovative center, which will be located at 170 S. Main Street in Orange, only a few blocks from CHOC’s main hospital campus.

“We are thrilled to be a partner with CHOC Children’s,” Bill points out. “Our vision aligns with their mission. They have exceptional doctors and staff who deliver outstanding care, and they are committed to making a difference in the world of neurodevelopmental disorders. I am also excited that CHOC Children’s has a Board of Directors who strongly support these efforts.”

The Thompson Autism Center at CHOC Children’s, which is set to open in early 2019, will be devoted to evaluating children as early as possible to promote better outcomes; engaging children whose behaviors diminish quality of life for them and their families; and establishing a long-term support system for children with complex care needs. The Center will also collaborate nationally in clinical research.

In addition, the Thompson Autism Center,  through  a partnership with Chapman University,  will assist families  in navigating the education system— from preschool to college.

“I have seen firsthand what a comprehensive center devoted to ASD can do,” Bill notes. “Early intervention, seeing the proper physicians and specialists, and receiving good care are vital in treating these conditions. Creating this Center with CHOC Children’s is an exciting opportunity and the potential impact on these kids will be our greatest reward.”

“I have seen firsthand what a comprehensive center devoted to ASD can do.” – Bill Thompson

Bill and Nancy’s generous gift and collaboration with CHOC bring hope to children and families affected by ASD.